You are here: Products Enchanted Waters by Collected Authors 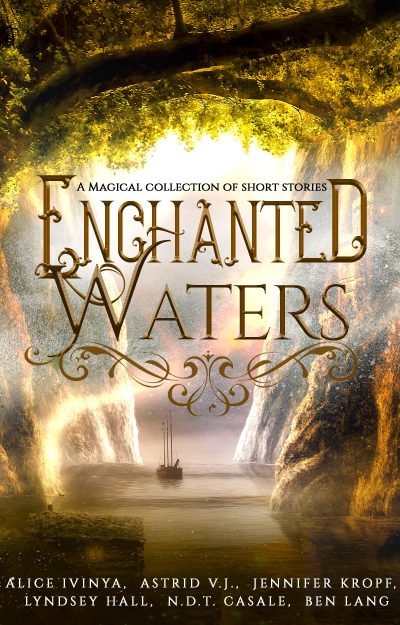 What really lies beneath the waves?

Dive into our magical collection of short stories written by award-winning and up-and-coming authors and follow the ocean’s call.

This book is fully illustrated with stunning paintings by Helena Satterthwaite and Elena Shelest.

All profits go to Oceana to support their mission to protect the world’s oceans and promote sustainable fishing.

This charity anthology aims to raise money for Oceana, a non-profit organisation working to protect our oceans and marine life, a cause very close to the authors' hearts.

We wanted to put a collection of stories together to raise money for charity, and once we'd decided on an ocean conservation charity, it made sense to write a series of stories featuring water magic and mythical water creatures. We're really proud to be doing our bit to save the oceans, having raised over $350 for Oceana since the book released in July 2021.

The sky had darkened to midnight blue and they’d almost finished the bottles of wine when Lorelei suddenly stood, kicking her shoes to one side, and started to peel off her black, handkerchief dress. “Come on, let’s get in.”
Raff gave Delta a quick look and stood up too, pulling his t-shirt up over his head and exposing his smooth, tanned chest. He discarded his sneakers and jeans, and sat on the edge of the pool in just his boxer shorts. “You coming in?”
Delta chewed her lip, gazing into the water, the reflections of the lanterns rippling softly across the surface. The wine had warmed her skin and soothed her frayed nerves, and no creature had appeared in the hour they had been sitting around the pool, the others with their feet dangling in the water. How bad could it be?
Lorelei was already in, shoulder deep in the inky blackness, red hair piled on top of her head with a black velvet scrunchie. She was resting her elbows on the side, still chatting to Noelani who apparently wasn’t in the mood for a swim either. Lani didn’t like to get her textured, black hair wet if she could help it.
“I don’t think so,” Delta said, hugging her knees to her chest.
“You could just dip your toes in?” Lorelei suggested, leaning back now and floating on the surface.
Raff slid in and completely submerged for one heart-stopping moment. Then he broke the surface and tossed his head, spraying water droplets all over Delta. She gasped and ducked her head behind her knees.
“Sorry,” Raff said, colour rising to his cheeks. The water clinging to his hair and olive skin glistened in the lantern-light, shimmering like the glints in his clear-blue eyes.
Delta shook her head and gave a small, shaky laugh. A few drops of water weren’t going to hurt her. She was being silly.
“The water’s gorgeous,” Lorelei murmured, closing her eyes and leaning back on the pool’s edge. Lani began plucking small wildflowers from the grassy bank and tucking them into Lorelei’s vibrant hair, fashioning a sort of floral crown.
Rafferty said in a low voice, quiet enough that Delta knew the others across the pool wouldn't hear, “You could just dip a toe tonight, and then both your feet another night. And eventually, maybe you’ll be ready to try swimming. But you don’t have to do anything tonight if you don’t want to. Ignore Lorelei, she means well but she doesn’t know what it’s like when you’re not…” He struggled for the words. “Like her,” he said finally.
Delta assumed he meant confident. Brave. Completely self-assured, even in the face of all the whispers and comments. The name calling and innuendos.
Lorelei’s mother had been the subject of much gossip when she’d arrived in Aberness twenty years earlier—widowed and pregnant—and had opened up her apothecary shop. Dorit had told Delta once that the villagers hadn’t taken to Lorelei’s mother, particularly the older women, calling her a siren and avoiding her shop, and the young, new mother had struggled to feed her child and keep a roof over their heads. Dorit had always made a point of popping in and purchasing some balm or ointment on her errands, deliberately overpaying on occasion, only for the flame-haired shopkeeper to chase her down and hand her change back.
Proud. That was how Dorit described Lorelei’s mother, and she’d passed that trait on to her daughter. As Lorelei had grown into a young woman with beauty to rival her mother’s, the whispers and small-minded gossip had transferred to her, but they didn’t seem to have any effect on her.
The friends had bonded over their status as social pariahs, and daughters of spirited single mothers, becoming inseparable by the time they reached their teenage years, and gradually they had added Rafferty and Noelani to their number. It had been that way ever since, the four of them fitting together like puzzle pieces.
Delta often wondered how Lorelei let it all go, like water off a drac’s back, when Delta herself wallowed in self-pity at every cruel joke or snub aimed her way. She couldn’t remember which had come first, her fear of the water or the jibes of seal girl and freak of nature. The whispers that her skin would turn slippery and grey the moment it came into contact with the water, prompting cruel children to flick their drinks at her during lunch.
It was ridiculous, childish nonsense. She’d bathed every day for eighteen years and never seen so much as a scale or webbed-toe.
Her friend seemed to possess endless self-esteem, and Delta couldn’t help but feel the sting of jealousy as she watched Lorelei drifting on the surface of the pool, black underwear clinging to her alabaster skin, completely at ease with herself and her surroundings.
Delta bit her lip, steeling herself. She kicked off her boots and socks. Rafferty gave her a surprised look, his eyebrows disappearing into his floppy, brown hair. She felt a rush of pride at having been underestimated. It spurred her on. She didn’t stop at her socks—she unbuttoned her dress and pulled it up over her head. Cool night air kissed her bare skin and she shivered, but the wine and the burning desire to be brave like her friend warmed her from the inside.
She dropped down on the bank and shuffled forward until her feet were just inches from the water. Silence filled the clearing, her friends seemed to be holding their breath as she lowered herself closer to the pool’s surface. She hesitated for just a second, then with a sharp inhale, she touched her toes to the water.