You are here: Products Emily’s New Everything by Elizabeth Allison 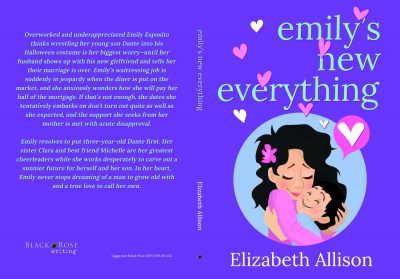 Emily’s New Everything by Elizabeth Allison

Overworked and underappreciated Emily Esposito thinks wrestling her young son Dante into his Halloween costume is her biggest worry-until her husband shows up with his new girlfriend and tells her their marriage is over. Emily’s waitressing job is suddenly in jeopardy when the diner is put on the market, and she anxiously wonders how she will pay her half of the mortgage. If that’s not enough, the dates she tentatively embarks on don’t turn out quite as well as she expected, and the support she seeks from her mother is met with acute disapproval.
Emily resolves to put three-year-old Dante first. Her sister Clara and best friend Michelle are her greatest cheerleaders while she works desperately to carve out a sunnier future for herself and her son. In her heart, Emily never stops dreaming of a man to grow old with and a true love to call her own.

Elizabeth Allison lives in London, Canada with her husband and their four children. She loves cupcakes, floating in the pool, hand-battered fish and chips, diet Dr. Pepper, and her dogs Mortimer and Mickey. She is meh about the cat. Elizabeth's second novel, "Emily's New Everything," will be published by Black Rose Writing in 2021.

When my son was young I wasn't a single mother, but I well remember the stress and angst of every day trying to do the right thing by him. When I was in highschool I worked at the exact diner that Emily works at, down to the screaming cooks and the coworkers who took smoke breaks that I envied. I loved writing Emily and I hope you will be excited to meet her.