You are here: Products ELUDING ILLUSIONS by Wren MIchaels 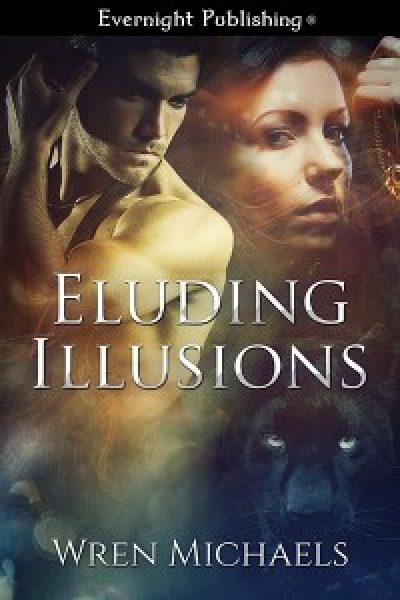 Emma Banciu dreams about her novels taking on a life of their own. Thanks to a centuries old Gypsy curse, they tend to do just that. Writing with pen and paper she brings things to life, and hell hath no fury like an antagonist scorned. Now she’s on the run from Kyrin, an evil demon warlord who surfaced from one of her first manuscripts. And the only way to get rid of him is to destroy the manuscript.

Enter JG1988, her long-time online friend. He knows nothing of the curse nor the magick Emma possesses. His only wish is to finally meet her in person and take their relationship to the next level. He reveals a surprise of his own when he shows up at Emma’s door as international recording artist Jake Griffin.

Destroying the manuscript will not only get rid of Kyrin, but also end her relationship with Jake. But keeping secrets from him may end up doing just that. In order to survive they’ll resort to love, lies, and a little Gypsy magick.

Wren Michaels hails from the frozen tundra of Wisconsin where beer and cheese are their own food groups. But a cowboy swept her off her feet, and carried her away below the Mason-Dixon line where she promptly lost all tolerance for snow and cold. They decided they’d make beautiful babies together and they got it right on the first try. Now Wren lives happily ever after in the real world and in the worlds of her making, where she creates book boyfriends for the masses to crave.

My obsession with Josh Groban lead to me making up the character of Jake Griffin. And since all of my books end up with some kind of magical entity in them, I chose a Gypsy curse for this book. I like to stretch the genre of paranormal from the norm of witches, fae and vamps.

The grandfather clock rang out its half-hour chime. Six thirty arrived faster than she imagined.
The doorbell echoed the peal of the clock. Her heart made a swan dive to her stomach as she tried to stay upright in her heels.
Wobbling her way across the room, she whispered to herself. “This is just J. The same J you’ve always known. The same guy you talk to every day online. The same guy you’ve dreamed about practically your entire life.”
Turning the handle, she drew in a deep breath. On the other side a hand held a single blue rose. Upon seeing the flower, a smile broke the tension on her face. He remembered her favorite color.
“I told you that you needed to smile more often,” he said, as the rest of his body appeared in the doorway.
She glanced up from the rose, over his tux-clad torso, to his face. Time stopped, along with her heart. It took everything in her not to release the shrill clamoring in the back of her throat and go all fangirl on the man.
“Let me introduce myself properly, I’m Jake.” Cupping his fingers around hers, he lifted her hand and pressed his lips to it. Heat surged through her body at the sensation of his warm lips against her skin.
J was none other than Jake Griffin, singing sensation—the man who could make women orgasm at the mere mention of his name. The same man who had four Grammys under his belt, five world tours, and still had time to throw in a movie or two, and he was barely twenty-five. At least the magazine sitting on her coffee table said so.
She stood frozen, partly due to shock. And, partly due to wondering if it would be in bad form to run to her bedroom and rip down the poster she had of him hanging above her bed.
Still speechless, she stepped back from the door and waved him entrance into the room. Her heart beat as fast as the hummingbird wings fluttering in her stomach.
“I know it’s a bit of a shock, and I’ve been meaning to tell you for some time. But, well I didn’t know how you’d take it.” He shoved his hands into his pants pockets as his gaze fell away from her.
“I—I just—I have no words. I mean, no one expects their blind date to turn out to be Jake Griffin.” Blinking, she threw her hands up in defense. “Don’t get me wrong, every woman in the world wishes it would happen, but to have it actually come true … okay, I’m just making this worse. I’ll shut up.” She snapped her mouth shut.
He stifled a chuckle and locked back onto her eyes. Excitement and embarrassment collided, and her knees buckled, forcing her to reach out to the back of the sofa to steady herself. Even in her four-inch heels he towered over her. Emma’s vulnerability had nowhere to hide.