You are here: Products Elissa Blue: Book One of The Winged by T.K. Perry 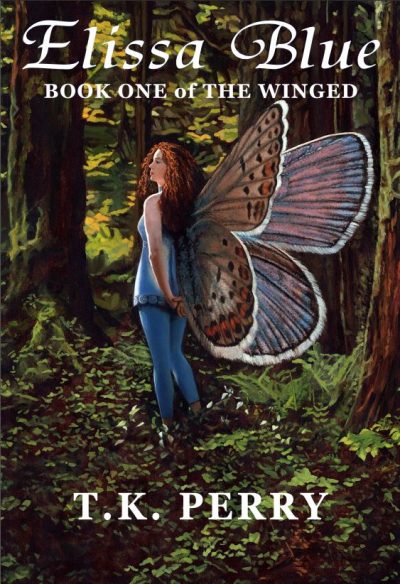 Elissa Blue: Book One of The Winged by T.K. Perry

Though she worried it might never happen, Elissa Blue finally has her wings. Now she must migrate to the Mating Mountain, find a husband, and get back down the impassable cliffs before she loses her ability to fly forever. If she doesn’t succeed, she’ll be stranded as a servant in the Old Castle for the rest of her life. And if she doesn’t choose her man wisely, she will be just as miserable.

T.K. Perry lives with her husband and daughter in a lovely Oregon forest filled with wildlife (there is probably a house, too, but that's less picturesque). When she isn't writing or watching said wildlife, she enjoys making jewelry, pretending to be a photographer, and trying to save the world (a frustrating task since she lacks both superpowers and a costume). T.K. received a B.A. in International Relations from Brigham Young University, an M.A. in International Politics from the University of Denver Graduate School of International Studies, and a J.D. from the University of Denver College of Law. She is currently working on Book Three of The Winged series.

I was reading Cornelia Funke's Inkheart where she talk about some of the fairies having dragonfly wings and some butterfly wings. I had been studying insects as a hobby at the time and thought how intriguing it would be if humans had to deal with some of the oddities of bug biology. I started writing Book One of The Winged series soon after.

Be the first to review “Elissa Blue: Book One of The Winged by T.K. Perry” Cancel reply