You are here: Products Eclipse by Ophelia Rue 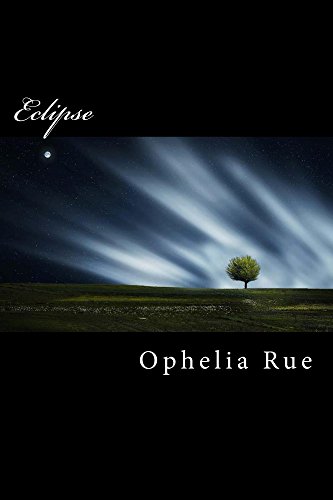 On the distant planet Oasis the secrets lay behind the Porcelain Man’s dead eggshell eyes. The panicked riddles he spews between catatonic cycles drive agent Carver closer to the missing. The brilliant Ceren Dore lies frozen in her virtual snow globe world, watching perfect false birds glide across a perfect false sky. She shatters in his dreams as the disease inside her grows. A secret society of eight guardians, the super elite, live in the shadows, ever tinkering, their dark mechanisms making the world their own. Echoing moans call from the dystopian nightmare of East Banzen as the war torn buildings grow twisted, a physical representation of their inhabitants. Through the chaos, one step ahead of a deadly assassin, Carver must piece together the clues as they intertwine with the hope to cure Ceren.
The conspiracy he uncovers changes him, changes everything, and sets him on a collision course with an ancient evil, waiting, ever patient, ever present.

When I was young, I was riding in the car with my mother and 2 aunts. As we approached my grandparent's house, a glowing white sphere floated up the street and hovered above the car. My aunt got out, stood on the hood and tried to touch it. When she did, the sphere shot strait up at a speed beyond anything I have ever seen. I was terrified and have been interested in science fiction ever since. The following day we ran into a neighbor from a few streets away who unprompted, told us she had seen a glowing ball floating above the river the previous night.

Carver’s implant alerted him and he closed his eyes. The
world became a flowing white sphere. Familiar shapes drowned in
milk then color formed around him until he found himself in Clive
Vance’s virtual office. Vance, the regional director of Oasian
Intelligence, sat behind his desk. He was in his nineties but like most
citizens of Oasis, appeared to be in his early thirties. He was thickly
muscled with a close trimmed beard and short hair. He would be
intimidating if it weren’t for his dark eyes that were understanding if
not kind. Vance looked up, “Good morning”.
“Morning.”
“How’s it?”
“I could be a little taller and I masturbate more than I’d like
but.” He shrugged indicating he was ok otherwise.
Vance nodded and continued in his all business manner that
would seem rude to some, but both men understood that small talk
was not either of their strong suits.
“We took in an off grid last night that claims to have
information on the abductions. He’s in holding block four.”
* * *
Carver passed silently through the wide corridors of the field
office nodding at coworkers when necessary. His manner at work
was a calm officiousness that those who knew him took as parody or
sarcasm, but intimidated those less acquainted, who took it at face
value. He had grown to accept that many of his unstructured
interactions were more like acting than being.
As Carver entered the holding block, he could sense Eddie
and Sue’s unease as the guards turned from their monitors. Sue
managed a “Good morning sir.”
Carver acknowledged the greeting as he moved toward the
cell’s window and looked in puzzled. Porcelain, ghost white, thin,
and bald, sat wrists and ankles cuffed to a metal table staring off
catatonic. He wore a light grey standard issue jumpsuit afforded to
all prisoners in holding.
Carver turned to the guards. “What’s with the cuffs?”
Eddie, looking like he’s spent the night in a haunted house
said, “ He requested them.”
Carver smirked and entered the cell.
He sat across the table and looked into Porcelain’s still and
tortured eyes. “Good morning. I’m agent Carver.” Nothing. Carver
leaned in close and snapped his fingers near Porcelain’s face. No
reaction. “You see the game last night? No? You’re more of a stare
strait ahead in a catatonic state kind of guy? What? That’s not nice.
I’m sure Eddie’s penis is average sized.” Carver turned to Eddie.
“Eddie is your penis average sized? We’re just talking length.”
“Slightly below.”
Carver turned back to Porcelain. “Ok, slightly below.
Anyway moonburn, I’m very busy so good talk.”
Carver stood and walked toward the door turning to the
guards. “Send him to the hospital. I don’t have time for this.” Sue’s
eyes widened as she looked behind Carver.
“Wait.”
Carver turned and saw nothing new.
“He just twitched.”
Carver reentered, leaned on the table, and waived his hand
across Porcelain’s face. No response. Carver shot her a
contemptuous look. The look died instantly as a guttural scream
echoed through the cell. Porcelain’s cuffs restrained him as he
convulsed violently. The scream turned into a growl as the striations
in his thin neck jutted out with inhuman definition. The growl
intensified. The cuffs cut into his wrists as his hands and fingers bent
to disturbing angles. The shaking continued until Porcelain ran out
of breath and the only noise was the sickening rattle of the cuffs
against the table’s metal rings.
Carver slid into the seat across the table. “Hey, wake up.
You’re safe. You’re safe.” Porcelain’s eyes darted around as he
gasped for breath, finally meeting Carver’s.
“They’re picking up. That’s what they call it. They call it
that. Three, three, three days from now. They’re gonna take more for
the tests.”
“What tests?”
Porcelain leaned back as if he just recognized he was
speaking to someone.
“I don’t know. I don’t know. I don’t know. I don’t know.”
Porcelain stopped talking and tried to slow his breathing.
“Relax. You’re safe.”
Porcelain furiously rattled his cuffs.
“No one is safe! Is this real? Is any of this real? Who are
you? Don’t let me out. Please, please, please, please! They’ll find
me. They’ll find me. Doctors. Doctors. I don’t know. Park area. Near
the towers. That’s where they’ll do it. That’s where they’ll pick from.
Pick, pick, pick. I don’t know if this is true or just supposed to be
true. Am I speaking or thinking to you?” Porcelain laughed
hysterically then gripped his head screaming in sudden pain.
Carver leaned forward.
“What doctors? Hey?” Porcelain’s head sagged and bobbed
twice as he lost consciousness. “Hey. Hey.” Porcelain slowly raised
his head. He opened his eyes, but was gone again into an abyss of
agony, oblivious to the world around him.

Be the first to review “Eclipse by Ophelia Rue” Cancel reply