You are here: Products Dwindle by K. A. Gandy 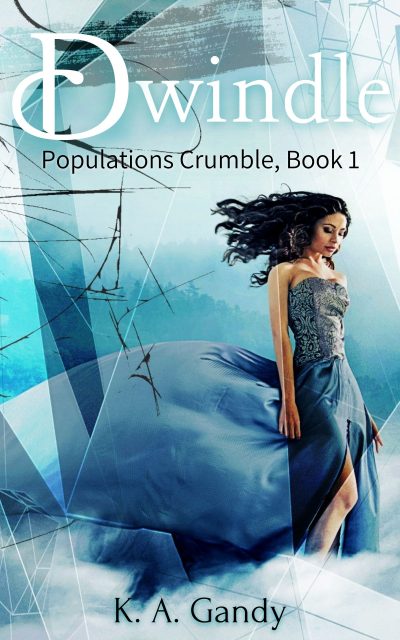 Dwindle by K. A. Gandy

Torn from her home and family. Forced to marry a genetically matched stranger. Will she find love, or destruction?
Sadie yearns for the loving marriage her parents share. But with the Sterilization Vector threatening human existence, she despairs she’ll be mated solely for her genetic compatibility. When she’s torn from her home and family and forced to marry a man she’s never met, she’s at risk of losing her dream forever.
Thrust into the compulsory marriage program, all is not as it seems. She’s shocked to learn that she has an unprecedented number of matches to contend with, some of which don’t have the best of intentions. Could her genes hold the key to unlocking what remains of the world’s reproductive potential, or will she be one more woman swallowed up by humanity’s collapse?
Dwindle is the first novel in the captivating Populations Crumble series. If you like dystopian reads with heart and a hint of romance, you’ll love this story.
One-click now to start this clean sci-fi romance that will keep you on the edge of your seat to the very end.
★★★★★
What readers are saying…
“…I didn’t know what to expect but this book caught my attention immediately. The characters were interesting and the storyline was great.”
“Enjoyed this first book in the series! It grabbed my attention from the first page!! I loved the characters in the book and can’t wait to see where life takes Sadie…”

K. A. Gandy was born and raised in Jacksonville, Florida, and is married with two kids. She has worked as a restaurant hostess, library book shelver, ranch hand, tour guide, Realtor, tech whiz, landlord, and small business consultant, all in addition to pursuing her passion of writing. As a person of many interests, her life has never been boring. She likes to write late in the evenings and thinks drinking hot tea and baking great cookies fuels hopes and dreams.

I was on a walk with my kids, brainstorming ideas for a book. Out of nowhere, the idea hit me. What would the future be like, if everything was exactly the same, but children were extremely rare? Why are they rare, and how does society respond to the dwindling population size?

About a month later, I'd fully sketched out the idea, and started writing.