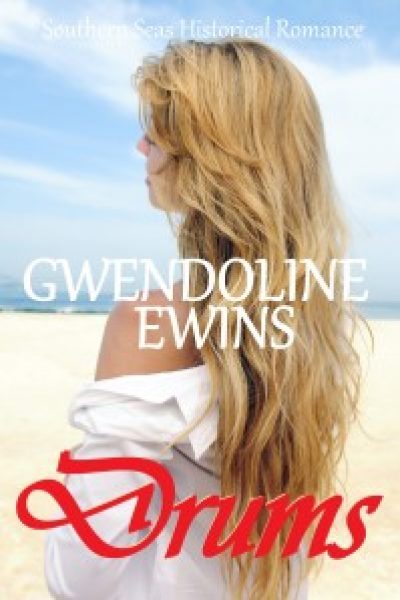 1825, Polynesia: Amelia Yorke is a destitute teacher with a petunia in a flowerpot outside a dingy Sydneytown cottage. Guy Richmond is a botanist searching for orchids in the rainforest and heir to vast lands in New South Wales. They should never have met yet come together on the deck of a sailing ship overlooking a spectacular tropical lagoon. They can only watch as a man paddles desperately towards them and freedom. He is overtaken by pursuers. Soon aquamarine water is stained by his blood.

I’ve always written but never attempted fiction until a few years ago. We’d moved to be nearer our daughter and her family and I found it difficult to set up practice in a new community. I dreamt I was a famous writer of romantic fiction – a surprise since I didn’t read the genre. I decided to “give it a go” and found it far more difficult than I thought it would be! “Drums” is the fourth book I’ve uploaded on Amazon. The fifth is written but not ready to be sent to my editor.

I’m intrigued by what caused people to leave their home and travel to distant places, especially if they had little choice in the decision. In 1825 the world was a difficult place for women in the new colonial territories, made a thousand times more difficult if they had no family to support them. Their options were severely limited: they took the best available.

The time for feasting was over. Huge amounts of food had been consumed or spirited away in banana leaves, now the drums primed the guests for the appearance of dancers.
Within minutes Guy Richmond was caught in the dancers’ erotic spell, summoning a wry smile even as he fidgeted to ease the tightness of his crotch.
Grass skirts hung temptingly low on hips, swaying gently to reveal long legs and more than a suggestion of buttocks. Hips swivelled to the tempo of the drums. Navels demanded attention. Breasts were exposed in a glorious assortment of shapes and sizes to fit the dream of any man. Graceful arms were adorned with sweet-smelling gardenia.
Guy shared a good-natured grin with a young Adonis who had been eyeing a particular wahine with lascivious intent. Sialosi had befriended Guy from the first and probably dreamt of accompanying him when he finally packed up his botanical specimens and moved on.
The grin faded as Guy’s glance rested on the man close by, equally honoured by being seated on a woven mat not far from the chief – and similarly aroused if the contortions of his face were anything to go by. Guy had taken the Reverend Jeremiah Howard in dislike during their first brief interchange, instinctively distrusting him regardless of his showy humility and earnest manners.
The tempo of the drums quickened and the new bride stepped out of the shadows into dazzling sun.
Arms high above her head, nipples puckered, Malama removed a lei of fragrant frangipani from around her neck and held it in front of her as she boldly approached the chief to adorn him. She had shared the chief’s fale for more than a month: now she reveled in his public declaration of satisfaction with her.
They were a handsome, bronze-skinned pair – the stuff of faery tales. Somewhere along the line a dollop of Asian blood had been added to her Polynesian ancestry, making her almond-eyed and delicate-looking. The chief was strong, intelligent and pure Polynesian, Samoan pedigree unmistakable in his broad six-foot frame. Eyes narrowed, he accepted the lei and ran his large fingers caressingly over fragile blossoms, causing sighs of appreciation from the spectators that turned into yells of approval when he jumped up and crouched against her gyrating hips, his arousal just a breath away from her backside.
A strangled wheeze came from beside Guy. Thinking – hoping Howard was having an apoplectic fit, Guy swung his head round to check and found he wasn’t, though the man’s skin had mottled and his eyes were bulging like onions.
“Pretty girl, isn’t she?” Guy asked impishly. “A good dancer too, don’t you think?”
Howard spluttered and struggled to get himself under control, his mouth opening and closing until he eventually regained the ability to speak. “Devil’s work,” he declared as if he truly believed it.
The drumbeat slowed and became languorous. The boisterous crowd was entranced and quietened as the golden couple danced an erotic dance that mimicked the act of love.
Few noticed Guy slip away a little later, making no attempt to answer the invitation in the eyes of several wahine. Early on in his years in the islands he’d decided not to become involved with any Polynesian beauties but deal with sexual release himself. The alternative was to risk little Richmonds all over the place. The possibility of catching the pox – though slim – didn’t appeal either. Far more enticing was the possibility of making a discovery of the orchid kind, and he was convinced the conditions on this island were ripe for it.