You are here: Products Drowning in the Shallow End by Charlie Mellor 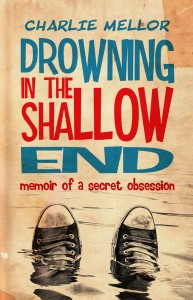 Drowning in the Shallow End by Charlie Mellor

A darkly comic true story about obsessive infatuation, revealing the depths to which people can sink, before they realise they’re in too deep…

For years, all Charlie Mellor wanted was to meet the alluring Pennie Fenton. Unfortunately for him, this wish came true. Captivation with the corrupting Miss Fenton soon developed into an overpowering obsession which sent his life spiralling out of control and jeopardised everything he held dear. It was because of Miss Fenton that he lost touch with his family and friends, got involved with the occult, upset members of the Greek Underworld and even volunteered one of his own fingers to be crushed by a sadistic stranger. Before he could free himself from her curious charms, he would need to acknowledge her real identity and expose the deep, dark secret she had kept hidden from him. Only then, would he find the courage to rebuild himself through a bizarre appearance on national television, where in front of millions of viewers, he would abandon all dignity and reveal the full extent of his downfall.

This candid tale chronicles one man’s epic struggle to free himself from a cruel and manipulative companion. Peppered with black humor, it unveils the damaging impact of an unyielding obsession. Positioned as an offbeat tale of misplaced mesmerisation, the memoir taps into the universal themes of temptation, desire and infatuation. It includes irreverent observations on life, loss and the enormous void between these two. Only at the end of the book do readers see that nothing is quite what it seems and this is in fact, a modern day parable about the redeeming power of love.

He would like it known that he no longer sees Pennie Fenton. She is not welcome at his house or in the general proximity of anyone he cares about. Because of her legacy, he has reluctantly been forced to change the names and details of many people in this book – in order to place them outside Pennie Fenton’s circle of influence. While it has taken Charlie until now to build up sufficient courage to admit to others that he knew her well; he can appreciate that many of his friends remain incredibly uncomfortable with such a declaration. He understands that for some, the cost of such a disclosure, would, even in these enlightened times, be far too great.

Interested in looking at obsession and infatuation from a different angle – introducing dark humor into the story to make it more accessible.

1 The End Has a Start
Of all my many foibles, the unconditional regard I had for Penelope Fenton was without doubt the worst. Oh, there were others – numerous little idiosyncrasies and peculiarities – but it was always the burgeoning interest in Pennie that would prove to be my greatest undoing. She introduced me to the best and worst of times, to the funniest, wildest encounters I can remember and at the same time, managed to fill every part of me with an overwhelming sense of dread. Ultimately, Pennie brought me to my knobbly knees, to the point where I was willing to surrender anything for just one more encounter with her. It was because of Pennie that I turned my back on my wife and children, lost touch with many of my good friends, got involved with the occult, fell out with members of the Greek Underworld and even volunteered one of my own fingers to be crushed by a sadistic stranger.
I first met her many years ago as an impressionable teen, but got to know her much better as a gullible adult when the two of us would go on to become practically inseparable. As our acquaintance grew, she demanded an unquestioning and absolute loyalty. I was told by others who knew her well, that if you were able to manage her incessant demands, she was capable of being a formidable ally. Unfortunately, I rarely saw this side. Instead, for me, she was always unyielding and unappeasable – a strict and merciless companion who insisted on complete obedience. Before I knew it, every choice I made and every action I took depended on her approval.