You are here: Products “Drawn to the Flames” Series – “Charisma’s Song – Part One” by Ariadne 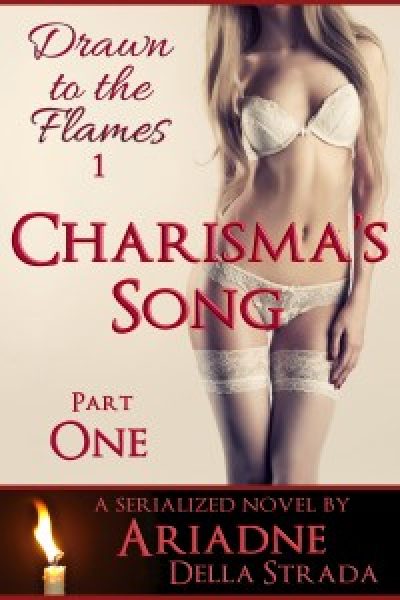 In the romantic San Francisco Bay Area, Kate Hadley sells a multi-million dollar dream home to the man of her dreams…only to learn he resides in the dreams of a dozen other women, too.

Kate’s a smart, hard working single mom, fighting her way to the top of the real estate profession. Sasha Hadley, her naively sexy daughter, is ready for college but not ready for the men who will pursue her now that she’s turning eighteen. When Harrison Hill, fast moving investments guru, professional bachelor and collector of captured hearts, walks into Kate’s office looking for a celebrity house, he walks out carrying Kate’s hopes and ambitions for herself and Sasha.

But will having one Hadley be enough for Harry? And what of the other women in his over-heated sensual life?

Charisma’s Song is a three-part serialized 45K word short novel. Each part is a short story, often with a delicious edge-of-the-bed-hanger ending. Each “Drawn to the Flames” novel tells a complete story as the series progresses.

Ariadne’s life and her personal triumphs and stunning disappointments are the best possible qualifications for spinning and weaving these tales. Her real-life affairs on four continents, her extensive travels, especially in Europe, and her long residence in Tokyo all color the drama and comedy she writes, as do her collegiate years in Berkeley and New York City, her work as a systems design and development professional, her years as a jet-setting marketer and consultant, and her successful stints as a major corporate division head and international seminar leader.

This short book is the first installment of a series that will have a minimum of nine 15-18K shorts making three short novels. Three additional sets are plotted if this first series does well. Yeah, I’m ambitious. Color me just another over-reaching female. :-))