You are here: Products Draoithe: The Ruiri Complete by Ophelia Kee 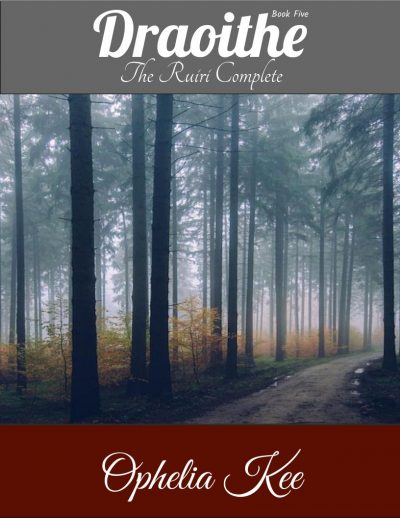 Griz was drugged and kidnapped, but the dream walker reached into the dream for help. His life mate, Melody, heard him, flew to him, and took his awareness away. She found a way to rescue him, but he was changed. Griz regains himself. A reckoning against the perpetrators had to happen. When the prophecy they lived by seemed likely to finally come true, Ash led the dragons to Draoithe. But when he found the maned wolf that had been turned without consent, he knew he would stop at nothing to save Raven. Raven thought the sexy dragon man was crazy. Can an offer she can not refuse and a chance to keep the dragon all to herself finally convince her to stay? A wildly dangerous and brazen romance balances a sensual, passionate, and charming affair. (Sex while flying isn’t bad either!)

It had all started with a boring meeting, a few manuscripts and a lot of crazy friends who had a bunch of questions and advice. Publishing was scary and hard. But telling more of the story of the Druid pack was easy, so I kept writing. Book five saw the Council of Kings completed and the the beginnings of the grey dragon's saga of love stories begin. This was the book where one of my friends asked me if I had not added too many characters. I replied that once the grey dragons stories were done, that was it. Another friend asked what about red dragons. I said that not every character had to have his/her own story. Several of my now beta reader friends grumbled rather loudly that I should not introduce characters that they were not going to get to meet. I argued that I had already done that with characters like Frank Grimes. Did the series have too many characters? Apparently it did not have enough, but that is a tale for a different book.

“Come here to me. Sit here with me. Do not be afraid. I will take nothing from you that you do not wish to give, but I will give you the proof of my words.” Ash requested.

Raven walked over to him and sat on his knees. He put his arms around her, and she lay her head against his chest as she wrapped her arms around his neck. He felt good to her. He smelled of brandy and sweet tobacco. She liked sitting with him like that. It was comfortable, but she failed to see how it proved that he was her mate.

Raven picked her head up to look at him and ask him, but the words did not come. She just looked at his handsome face. His eyes were bright. He had really full lips. He was gorgeous. She wanted to kiss him just to see what that felt like. She could kiss him, he would not mind. He had looked at her with desire that morning. She had negotiated for him, so technically he was hers.

She leaned into the kiss. His big strong hand cupped the back of her head and tilted it slightly. He wanted her to kiss him. She was thrilled at that. She closed her eyes as their lips touched. His lips were soft. Ash was so hard, so masculine, but his lips were soft. He took command of the kiss and increased the pressure on her lips. She liked his strength. It came through to her even in his kiss.

His lips claimed hers. She could not breathe, but she did not want him to stop. She wanted to drown. Her whole body was alive. She was trembling with excitement. His lips moved over her own as if his lips needed to know hers and no detail could be left out of that knowing. He started to end the kiss, but she could not allow it yet. Raven growled at him. He smiled into the kiss. Instead of breaking it, Ash deepened it.

She felt his lips part over hers, and his tongue caressed her mouth seeking to gain access to taste her. She groaned into the kiss and opened to him. His tongue invaded her mouth. It caressed her teeth and glided along her tongue sending shivers down her spine. He tasted her for long moments. She became brave and tasted him too. He let her tongue slip past his lips to feel his teeth and tangle with his own.

They shared the knowledge of taste of the other. Ash tasted like he smelled, of brandy and sweet tobacco. It was surreal. When he finally broke the kiss, she was panting trying to breathe. No one had ever kissed her like that. She was just looking at him, breathing. He was smiling at her. She grew shy and looked away.

She wanted more, but was afraid. He felt so good. It was too good. She looked back at him. Then she looked down unable to meet his gaze at the moment. He was hard for her. She could see the evidence of is desire. She had made him desire her again as he had when he looked at her this morning. He placed his fingers beneath her chin and lifted her face.

“You aren’t ready for that. It can wait. I will not deny that I desire you for my own, but we have time. We are immortal. There is no rush. Do you believe my words now?” He asked her.

“I… nobody has ever… that was… you are…” She trailed off. She did not seem to have the right words. Her thoughts were racing around crashing in her mind.

“I agree.” He said. She laughed softly.

She wanted to kiss him again. He did not try to stop her. He obliged her. He was more demanding this time, more forceful. He let her feel his power over her as he kissed her, tasted her, loved her mouth. His tongue was so good, so skilled. This man knew what he was doing, and she had never been handled so masterfully. She absolutely did not want to stop. Her hands were skimming over the hard planes of his chest. He pulled her tightly against him trapping her hands as he kissed her deeply. She moaned into the kiss. She wanted this man.

He broke the kiss and began kissing down her jaw to her ear. She cried out in pleasure when he sucked her ear into his mouth and kissed it as intensely as he had kissed her mouth. Damn, he was good. It was too intense, her fear rose. She broke away from him. He instantly released her.

She felt silly, like a schoolgirl with her first crush. Raven was unsure how to react. She wanted him, but she was afraid of the intensity of that desire. It like everything else was a bit overwhelming.

“Don’t be. I’m intensely pleased. You have no need to apologize. I believe that I have proven my point satisfactorily.” Ash smiled at her.

She could not think clearly. Her mind was in a blissful haze from the kiss. Thoughts did not work. What point was he trying to prove? That he was really good at kissing?

“I am your mate just as you are mine. The way that kiss felt is how it will always be between us.” Ash replied grinning at her scattered wits.

Oh, yes, Ash was her greatest strength. She wanted this man as she had never wanted anything. He was not opposed to that. He wanted her too. Raven would have him.

Be the first to review “Draoithe: The Ruiri Complete by Ophelia Kee” Cancel reply