You are here: Products Draoithe: The Dark Gift by Ophelia Kee 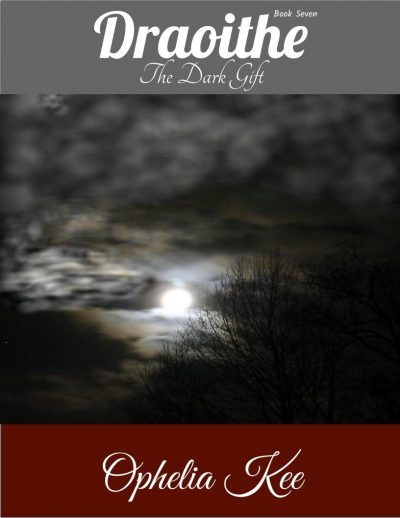 Flame meets Nightshade and the dragon who loves the night finds himself in a no win situation to save a broken vampire. His past makes his brothers suspect him incapable of saving her. His honor makes him doubt himself. She is forbidden and taboo for him as no other could be. But Nightshade needs him because he is all that she has left. Without him she has no hope, and the fade will soon take her. Can he find a way to save her? Will the laws he has sworn to live by condemn him if he finds a way? Provocative and wild steamy sex scenes for adults only.
No Cheating! A guaranteed HEA. Enjoy…

The whole series was great even if it was far more than I had ever anticipated writing. The few books that I had published were just quietly sitting on Kindle. I was not an overnight success, but the writing drew me back. The story called out to be told. My friends kept pestering me for more. But the demands of my professional life got in the way of writing, and the grumbling from my friends who were my de facto beta readers only grew louder. I threatened to quit writing the series altogether. It took a lot of time, and it was not exactly making money even if it was entertaining all my crazy friends. But Flame. He was a serious character and Nightshade was so very much broken. I had to tell their story didn't I. So book seven took forever to write, but was good. I mean it was really good. My friends ate it up and read it twice. The only thing was, it was not really ever a finished work. I had so many deleted scenes that just did not fit the book. It was hard to believe that they might never see the light of day in a book. I had not even written the other dragons stories either. So one more book at least. Then It was done. I would quit writing. Well that did not happen!

The bear was smiling at Flame’s mate, and the dragon in him made the fight a bit more real than he had intended. When he hit the door, he stole the shifters’ attention from her. They should not look at her with desire. She was his. Nightshade was treasure.

“There you are Nightshade, I thought I had lost you there for a minute.” He slurred his words and stumbled a bit. His adversaries immediately assumed he was drunk, and they turned to face him.

“Go away, Flame. You have had too much to drink.”

The little imp was playing along with him. He would have grinned at her if it would not have given him away to the other men. God, he loved her. She was more perfect than he could have ever imagined. He stumbled closer to her.

“I’m sorry, Nightshade. Please forgive me. I swear I can be good.” He slurred the words as he begged her. She looked at the other men around her as if she were helpless to deal with Flame. Nightshade was too good at this game.

The bear took the bait first. “Do you need help getting rid of this fool, ma’am?”

The bear made her the offer. The wolves nodded agreement with the bear’s sentiment. She nodded and looked away from them. She had all three of them at once. Damn, even her power was sexy.

“Don’t run from me Nightshade. I need you.” Flame told her. That was easy. It was true. He did not have to act it.

“She asked you to go away. I think you better leave her alone.” The bear spoke to Flame. The shifters thought it would be easy. They had no idea he was a dragon.

“Mister you need to move away from my lady before you regret it.”

Flame’s words had a harder edge to them than he had intended. Nightshade was his. The dragon inside did not want these men looking at her with desire. She was his mate. Flame was having a harder time keeping up his pretend drunkenness as his adrenaline spiked up in anticipation of the fight. He stepped slowly forward again trying to appear drunkenly wary. He stared the bear in the eye. The challenge was extended.

Be the first to review “Draoithe: The Dark Gift by Ophelia Kee” Cancel reply