You are here: Products Draoithe: The Council by Ophelia Kee 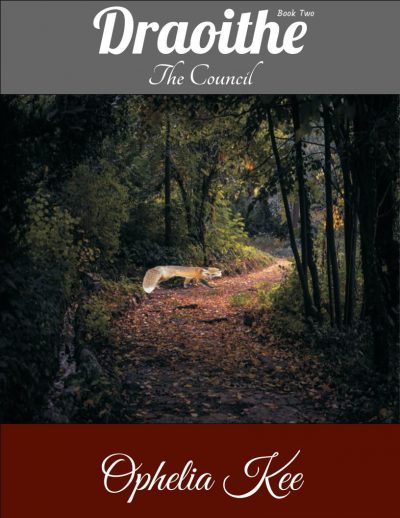 Draoithe: The Council by Ophelia Kee

One sly old fox and his mate, Artie, save a friend, but the trouble that brings forces them to run from their home. Luke and Eli are their best hope, but their friend is not ordinary. She is a legendary phoenix shifter. She is hurt and needs a safe haven to heal.
Javier sees her and barely contains his anger that she was obviously beaten. When his inner direwolf jumps for Isabell, Luke makes him responsible for her care.
Fox makes the newly formed Druid pack an offer they can’t refuse when he asks his old friend to be raised as the Ri ruirech, the overking so he can be fully Ruiri once again and set his queen free. Innocence and forbidden love make this a sinfully steamy romance for adults only!

Not who everyone thinks she is.
The product of someone’s imagination.
The end result of a lifetime wishing to get out.
Do not buy the lie.
If you live in fear, you give up freedom.
Taking the risk and making the leap.
Too much of anything is a bad thing.
Innuendo floating on the mist that rises above the water.
Walk away and leave it all behind.
Telling the story that haunts a fantasy.
Catching a dream.
She does not exist.
Independent author

When I finished Draoithe: A Pack Forms, it was not published. It was technically not even a finished manuscript. My friends who had read it kept asking me questions about the side characters and what happened next. So I added to the book. Only Google has a word limit, so I had to break the book into two parts. The Council became book 2 in a series that I had never thought I would write. Now there are many books in the series, but I am still answering questions about the characters and writing what happens next. I began publishing a couple of years ago, and more readers asked more questions. The Council became the start to an immortal kingdom that grew out of a need for a pack.

She was so pretty. She had paint on her fingers and a bit on one cheek and a smudge on her nose. He was enthralled. He could get so incredibly lost just looking at her. Forget her paintings, it was the artist that Javier needed to see.

“Plus, by the way you are looking at me, I guess I need a shower.” She was looking down at the paint splatters on her clothes.

Javier stepped up to her and lifted her chin with two fingers. She looked up at him, and he leaned down to kiss her. His lips touched hers. He was lost to her. He wanted only for time to stand still so that he could forever memorize the way she tasted. His lips moved over hers, and his tongue traced the seam of her lips. Her lips parted, and he tasted her.

Isabell groaned, and he began the slow fall down into the depths of love. He tried to stop, to pull himself back from the brink, but he was too far gone. The slow motion roller coaster was taking him for the longest ride. He let go and let it take him. He wanted it. He had waited so long to be with a woman he truly wanted. He wanted the trip to last forever. He let the kiss linger and continue just so he could feel the fall.

She made his heart rate speed up. She made him work for her. He had to retain control, but the intense desire to feel her, to kiss her, was more than he could resist. Javier needed to press play for Isabell. He had to find out where it led.

He closed his eyes as she reached up and locked her hands around the back of his neck. Her body was pressed tight against his. He was hard, but he needed to just kiss her and feel her in his arms. He luxuriated in just holding her and kissing her. The feeling was so intense to him. He was awed by it, lost in it, revelling in the intense pleasure. No woman had ever made him feel like this, and he was never giving her up. Javier had to have Isabell.

When he broke the kiss to breathe, he leaned his forehead against hers. Never in his life had he wanted to take things slow, to draw out the intense pleasure of the chase of a woman, but for some reason he was in no hurry with her. She needed slow and confident. He wanted to give it to her. She would not be nervous or fearful with him. He could win her without forcing anything.

Javier protected her, shielded her from his intense desire. He showed it to her only a bit at a time, allowing her to get used to it instead of being frightened of it. This broken little bird would be mended, and she would be his. Isabell would know his strength and his control. She would beg him for what he wished to share with her, and he would not deny her when she did.

“Did I cross a line?” He asked her huskily.

Was that his wavering voice? Surely not. Wasn’t he supposed to be the confident controlled experienced one in this dance? Why did he sound like a teenage boy…? “No, I want to do that again, please.”

Be the first to review “Draoithe: The Council by Ophelia Kee” Cancel reply