You are here: Products Draoithe: Fire and a Gryphon by Ophelia Kee 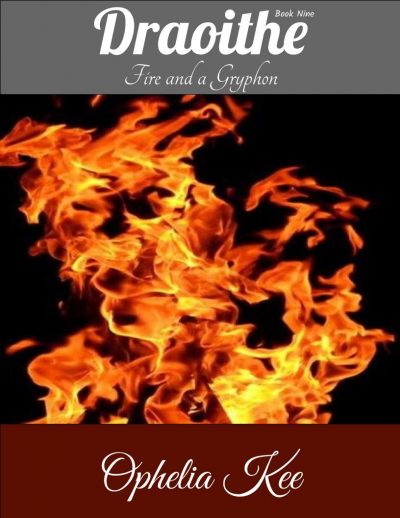 Draoithe: Fire and a Gryphon by Ophelia Kee

What if the only way to protect your people was to figure out how to recharge ancient gargoyles? Marchand is sent out on just that mission, but his orders were tampered with. Even after he protested, he was still required to finish the mission. The trouble he gets into lands him at Draoithe, a prisoner unable to leave when his life mate shows up being attacked. The woman his crimes were against becomes his unlikely ally if he will only help her claim a bear. Spark is literally fire as a woman. But after a vision she saw with her sister, she is sure her bear is coming for her at Draoithe. While she waits, the idea of building sentinel gargoyles gets bandied about as an extra layer of protection for the people, and she and her sisters begin the process for combining their magic to build a full complement of fated mate stone guardians. Steamy and sweaty. Stolen innocence and endearing love.

So I had thought to end the series at book 8, but the backlash from my friends slash greatest critics pushed the ending off into the future. MY friend who had once asked if the series had too many characters was pissed that I tried not to tell Spark's story, but that had led to Marchand's story so, here we are at Book nine. The book is over 115,000 words. So long as google docs says we can get away with it, so we shall. But what about Leon Vadim, the drug addict red dragon made by elementals who is a bit of a misfit even if he does always try to help? His story is important. Where did he even come from? That question showed up over and over by my friends turned beta readers. So I tried to just explain that with the next book. But that only led to something else. But I have sort of understood keywords by this point, and the Draoithe series has begun to make some money. Okay so it is only gas money to the lake to get away from all my crazy friends who just want to know what happens next, but it is something.

“I know. If it had been a situation like that involving my sisters, I may have done the same. You don’t seem like the bad guy here. It just feels as if you were trapped between your orders and helping your people. If you had come to me and asked for my help, I would have readily given you the knowledge that you sought. Considering what happened to my sisters and our home and businesses, I can see how you felt that simply asking would not work. The Leaindeail is complicated and dangerous.” She paused and looked away then back. Considering everything, Marchand just managed to enter her life at the wrong time.

“Shall we start over? The unlikeliest of friends, a gryphon and a fire elemental.” She asked.

“I would like that. I do feel alone here. I have spent the last two hundred eighty years with my clan. Now…” He trailed off. He was lonely.

“Marchand, I can’t undo what you did, or what Luke has decided. But I can forgive you. I am in need of some information on shifters. Would you be willing to help me?” Spark asked. If he thought her offer of friendship was genuine, maybe he might really be a friend. Spark did not have many of those.

Marchand smiled. It was warm and genuine. He seemed interested in helping her. “Sure, what can I help you with?” He asked. They sat down at the dining room table.

“There’s this bear. He is a dreamwalker. He visits my dreams. I like him. He spoke to me for the first time today when he called me into the dream. I know that he asked the dream to show him his mate, but he seemed not to believe that I could be it. How do shifters know when they have met their life mate?” She asked after she explained her situation.

“It has never happened to me, but many gryphons speak of it. Shifters rarely live long past the century mark if they do not meet their mate. Immortality is hard to face alone. Some immortals take consorts and random lovers, others immerse themselves in their work or join with packs, clans, enclaves, etc… just to not be alone in order to keep from fading if they have no mate.” Marchand told her.

“Elementals always seek out the other three. That makes sense. Is that what you did?” Spark understood that. She felt as if she needed her sisters.

“Hardly, I attribute my age to my singular lack of maturity.” He laughed.

“But you need general information, not my life story. Finding a life mate for a shifter is intense. For some it is so intense that they can literally get lost in their mate. It happens with birds a lot. Skin to skin contact is a common indicator. The connection is like electricity that jumps between you. You feel as if you are drowning in them, but you want to drown. It should feel like a magnetic connection where you are drawn to one another.” Marchand spoke as if it were a dream that he hoped for himself. It sounded like the happily ever after love story from the romance novels.

“You will find her, March. Don’t give up hope.” Spark told him.

“Spark, I am over three hundred years old. Being so far from my home makes me feel my age and my loneliness. I despair. But I still hope that you are right.” Marchand said sadly.

“How do the men behave?” Spark asked. She needed to know if Scar thought she was his mate or not. She wanted to draw Marchand's thoughts to something that might lift his mood.

“The men become very possessive and territorial. They stake a claim on the female. Other shifters will not speak nor look too long at a claimed female. She is everything. I would protect my mate with my life. My money, my station, who I am, it would all be sacrifice to her. Often gryphons would attack another over a female if they felt she was being threatened or that someone was trying to take her from him.”

Marchand paused then shook his head as if dismissing a memory of gryphons fighting over a female. He continued the explanation a few moments later, but he seemed a little distant.

“It is hard to choose death when the most enchanting person in the dream wishes to be with you.” Marchand summed up the need shifters had to find their mates.
“He asked if I would be here when he arrives this weekend. I think that was a good sign. I hope he does not decide against me. I like finding him in my dream.” Spark told Marchand.

“It sounds as if he may be anxious to meet with you. I wish you luck in your quest to bond with the bear.” Marchand smiled at Spark.

Be the first to review “Draoithe: Fire and a Gryphon by Ophelia Kee” Cancel reply