You are here: Products Draoithe: Elementals by Ophelia Kee 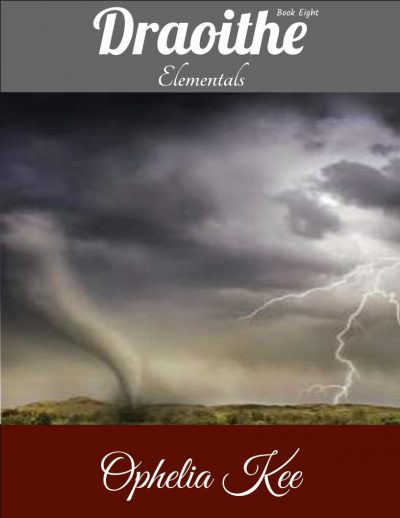 Three dragons fall head over heels for three elemental sisters. Two of the sisters were mistreated and a bit unwilling to just walk away from everything they built before they were abducted. The third is a bit leery of her dragon, but he seems to know exactly the right things to say to make her want to stay. Plus her sister is supposed to be meeting a bear if the dragon knight admits that he belongs to the earth elemental. But loving an elemental is dangerous. They need sedr energy to build large scale magics like sentinel gargoyles. Will the dragons play energy host to three elementals? When it is discovered that the fourth sister is being hunted in their hometown, the dragons will have the chance to prove themselves to their Valkyrie. Failing to rescue the sister will doom the others to the fade. Earth, wind, water, and fire, the spirit elementals come to Draoithe. Explicit sex scenes and uncensored adult themes.

I had written several books and my friends really liked them. The story had gotten good and I continued adding to it in order to appease my crazy friends turned beta readers. I had published several books and made no money, but the story though. I figured out book branding and changed all the covers, but marketing was still a sigh. The elemental magics had been discovered by dragons in a warehouse. The idea of an immortal sanctuary had become a seriously real thing. None of my friends voiced any complaint when I told them that Book 8 was going to be the last book. They just patiently waited for me to finish the rough draft of the manuscript.
I shared it on google docs, and that was when the backlash hit me! 'That was the end? Really!?'. You better not leave it like that! "That Sucks. Rewrite the ending." WTF happened to the sister? 'I demand to know about the sister. There is four of them That's it for Ember? More. There has to be more to his story…. etc… etc… ETC… But the book was like Hella long at over 90,000 words already.
I had to rewrite the ending because literally everyone HATED it. So I tried to rewrite it, but this fool gryphon showed up when I did that. Which of course led to one last book. That's it. It was not selling. My friends were driving me crazy. The writing had hijacked my life. Blah blah blah… And you probably know how that went by now. LOL

She was again as she had been once before. An exact copy of the only thing that had ever mattered to him. In life he had been a warrior, a knight. She had shown him favor before he had ridden out to defend Lachsmead. He remembered her face above all other things from his life as a man. She was bound in front of him, a prisoner, mistreated, abused. Pain at seeing her that way coursed through him.

For a moment he was lost in time, confused about what he should do, or where he was. His heart ached. Lachsmead was only a ruined tower. The castle had long ago fallen, yet an apparition lay before him. A flesh and blood ghost stared at him through emerald green eyes beneath matted tangled brown hair. It was her, exactly as he remembered her.

He breathed her name in Gaelic. It was not her real name. It could not be. It was the name that he had called his love from his life as a man. He no longer knew if that was her real name. The woman in front of him froze and looked him in the eye. Did she understand him?

“An bhfuil aithne agam ort? (Do I know you)?” She asked in Gaelic. Was it her? She even sounded the same. But it could not be. He was having a difficult time separating his broken memory from his current reality. Could dragons suffer from a psychotic break with reality?

Ember shook his head and looked at her again. The spell was broken. He was in a warehouse, and he was supposed to be rescuing his Valkyrie. He was a dragon, and he had a mission. That above all else must be completed properly.

He spoke in English to the woman he had mistaken for his former lover. “My lady, I am called Ember. I have come to take you away from here. Will you allow me to bring you away?” He needed to ask. He certainly could not be as her captors were.

“How do you know my true name?” She breathed a bit fearfully. He froze. Her name was really Earth Flower? He answered the only thing that seemed plausible.

“I am a dragon. I have second sight.” He was lying. He had not even sought her true name in her aura.

It was not exactly true that he should know her name. He would have learned her name as a Valkyrie eventually, and he knew she was an earth elemental. But Ember was just as lost as she seemed to be.

If he could get her permission to take her out of the evil warehouse, he could try to explain later. Maybe she could help him sort it out. If she could not, he might have to find out if there was a way to fix his obviously broken mind.

Be the first to review “Draoithe: Elementals by Ophelia Kee” Cancel reply