You are here: Products Draoithe: A Pack Forms by Ophelia Kee 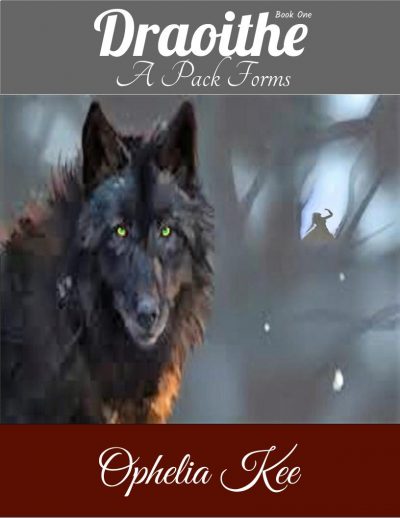 When Luke meets Eli he just knows she is the one that was meant for him. Eli likes Luke, but her past makes it hard for her to trust him. When a series of events leads Luke to try to link with her, both their secrets have to be revealed. He is a direwolf shifter, and she is a tiger.
In order for them to have a real relationship, something has to be done about her ex, but Luke likes the man. His inner direwolf wants a pack beta, but when a lowlife thief comes around looking for information about Luke being a shifter, it’s Eli and Javier who pay the price. Can he save his mate and her ex who has become his friend? If he can, how can he fight back against those who would hurt the ones he loves? It’s time to build a pack! A brazen tiger and a lonely direwolf get involved in an explicit love affair!

I did not start writing until about five years ago. I played it safe, took the 'good job' and went to work everyday for years. I was sitting in a boring meeting, disguised as a training session, on a subject I was more than familiar with as I had been required to attend a similar meeting no less the five times in three years. I was bored. But my favorite escape, my books on my Kindle was not happening. I did have access to my laptop. I sat in the back and pretended to listen to the speaker. I began writing A Pack Forms. It was awful. It took me months to write it. I hated it. I deleted everything but the first chapter and started over. I liked writing, but everyone's first attempt is not great. I wrote a better story. A couple of my friends offered to read it and tell me what they thought. I shared. They wanted to know what happened next. Draoithe the series took off from there. I published the book on Kindle and nothing happened, but I kept writing. Now there several published titles in the series and my readers keep asking for more.

As long as she seemed interested in looking, he was in no hurry to dress himself. With the sun gone, the air temperature was dropping fast in the fading light, but he did not notice. Luke was entranced by a beautiful woman who was looking at him as if she wanted to taste him. He wanted to growl at her his acceptance of that desire.

Eli was wearing tight fitting black and gray workout clothes and tennis shoes. Her long, dark blonde hair was pulled up in a ponytail. She must have stopped by on her way back from the gym. He just stood watching her muscles move under her clothes as she walked towards him holding his phone. His eyes drank the vision of her as if she were the only thing he had ever seen that was worth the look.

She was fluid grace walking. Her footsteps totally silent. He could not hear her move even though he was watching her move toward him. Strange, he was entranced, lost in watching her move, noting the silence of her step. It felt as if he were watching a natural predator stalk its prey. He bet he was the only prey that had ever wanted desperately to be caught.

“That was impressive,” she said, eyes devouring his hard chest muscles and his washboard stomach. He liked the way her gaze lingered on his upper body. He was heating up just knowing that she liked what she saw. He wanted her to touch him with her hands as she had with her eyes.

“It wasn’t meant as a show, but I gladly accept the compliment. What brings you by here, my Lady?” He asked trying to decipher how he had gotten so lucky as to be in her presence again. He wanted to keep her talking so she would stay longer.

“You dropped your phone in the parking lot at the school. I thought you might want it back.” Eli was almost breathing hard herself as she handed him his phone back, her eyes still drinking in his upper body as if she were starved.

Her smell of shade in the summer blew on the light breeze. He found himself breathing it in wanting to save it in his lungs and memorize it in his soul. No one had ever affected him the way Eli did.

Luke brushed the back of her hand lightly with his fingers as he accepted the proffered phone and slipped it into his pocket. The skin to skin contact sent electric shocks up his arm. When she sucked in a breath, he knew she felt it, too. He was under her spell, but she was just as lost in it. He almost groaned at the way her touch had made him feel.

She was standing less than a foot away. He was sure she should be able to hear his blood racing through his veins and pounding in his heart. Her proximity had blood flowing below his beltline, and he was hoping like hell that his joggers were hiding the effect she was having on him. He was so intoxicated with her.

“You’re welcome. I was afraid you wouldn’t text me without it.”

She almost whispered her words as she looked up at him. He got lost in her olive green eyes. His need to touch her was like an all-consuming fire. She was so close.

The world, the cold, the night, they all faded away. Eli was his only focus. Her presence in his world stole his whole awareness of anything but her. Dangerous. Luke reached out and cupped her face in his hand. The thrill of touching her so directly made him weak. He was almost trembling with excitement. The smell of shade in the summer enveloped him completely as she rose up on tiptoe, and he leaned down to kiss her.

Be the first to review “Draoithe: A Pack Forms by Ophelia Kee” Cancel reply