You are here: Products Double Massive: A Twin Stepbrother Romance by Cassandra Dee 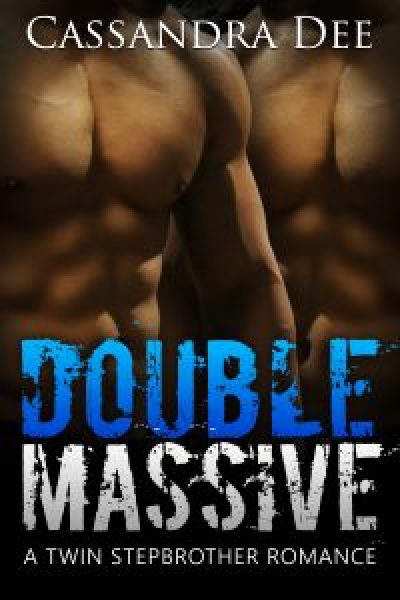 Every menage has its secrets … especially those with twins.

When I met Logan and Lance it was like a dream come true. They were everything a girl would ever want … charismatic, gorgeous, and successful. But it was weird because when we started experimenting with the forbidden, Logan and Lance were curiously secretive. Was it because we were steps, our relationship taboo, or was there something else … maybe even another woman?

Join Kacey on her journey of discovery to a place where the unexpected becomes real.

Note: This is a standalone book with a guaranteed HEA. This book contains a complimentary copy of Twin Stepbrother Secrets (The Complete Series).

I have three stepbrothers, but I’ll let you guess if there’s a set of twins among them!

DOUBLE MASSIVE EXCERPT: Logan
I was back at the Donkey Club, the music banging and grinding, splitting my ear drums even from outside.
“A hundred bucks cover,” spat a dude with a greasy comb-over. A hundred bucks for this joint when last night it had been ten? What the fuck? But whatevs, I was on a mission.
Indoors the noise was even worse. Sawdust flew everywhere, making my throat itch and eyes water, the other patrons a line-up of red-neck meth users. Where did these people even come from?
I know I’m an arrogant shit, using phrases like “these people.” But seriously, you don’t find folk like this in Manhattan. There were literally dudes wearing overalls and cowboy hats, like they were just back from the farm after a hard day’s work. What the fuck? Didn’t they see it was the concrete jungle out there?
But I was here to find one girl only. I didn’t know her name, which was pretty pathetic because how could I ask management if she was working tonight? But I’d find her … a girl like that has assets worth solid gold, and she’d be working them for all they were worth.
Three girls shimmied and jiggled on-stage, but none of them were the delicious blonde I’d sampled last night. I waited patiently in the back, semi-hidden in the darkness, waving away girls who tried to approach me.
Suddenly I heard the sound of bugles, a cheesy prepackaged sound effect.
“Ladies and gents,” blasted the MC. “May I announce the start of tonight’s Mongo Size Contest?” he chortled.
What the fuck was this? Were girls with huge breasts going to get up and dance, showing off obscenely huge knockers? God, I hoped not. I hated those Guinness Book of World Record types, the girls who could smash watermelons with their Double H jugs. It was disgusting, the women almost deformed, painful to look at from multiple plastic surgeries.
But instead, I saw that security was locking the doors, a hush of anticipation descending over the all-male crowd. A blue light came on signaling the ok, and the MC gestured for a few girls to come on stage.
“Come on ladies, don’t be shy… not that you’re ever shy,” he cackled again, the purple velvet suit making him look like a garish clown.
And oh shit. One of the girls was the girl from last night, the one I was looking for. She was luminous, her skin golden and tan, her legs long and shapely. The other girl was just mediocre, and the third was downright fugly. Hey, this is the Donkey Club. If you want to find a stripper who was the product of incest, you’ve come to the right place.
I saw that my girl was smiling but edgy too. Why? In fact, all of the girls looked a little jumpy, nervously eyeing the crowd.
“Alright gents, it’s the first time we’re running the Mongo Size Contest, so thanks for forking over that extra cover tonight, one hundred percent of it goes to our girls,” he said with a wink. Bullshit, that cover was going straight to management. But what the fuck was the Mongo Size Contest?
As if answering my unspoken question, the MC blared again.
“These girlies here are going to ride some dicks … and the girl who rides the biggest one wins!” he cackled.
No shit! Was this really going to happen? Were dudes really going to put their stiffies out there and let a girl climb on? Was my golden girl going to ride a big dick … for money in public?

Be the first to review “Double Massive: A Twin Stepbrother Romance by Cassandra Dee” Cancel reply