You are here: Products Double Her Fantasy by Randi Alexander 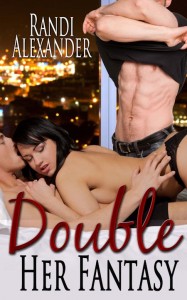 Double Her Fantasy by Randi Alexander

At a comic book convention, artist Megan Shore is thrilled to meet action movie hunk Garret McGatlin. Usually reclusive, Megan flirts with the leading man of her sexual fantasies. He invites her to his suite for a drink, but when she arrives, his rancher brother Trey opens the door and unleashes Megan’s cowboy fantasy. Both men pour on the charm, and she can’t decide which of them she desires more.

The McGatlin brothers have shared women, but none of them were like Megan, irresistible and perfect for both of them. Working together, they execute a potent seduction. During a hot, amazing week, the three-way relationship becomes emotionally charged. When they’re thrown into the media spotlight, Megan fears the exposure will trigger a past threat. Garrett and Trey need to prove they can keep Megan safe as well as happy and satisfied in their arms.

Saddle up! And prepare yourself for the sexier side of happily ever after.

The man in the elevator heaved a loud breath as he stepped back against the glass wall of the elevator.
Megan took a spot closer to the front, not as brave about the dizzying height as he evidently was. She noticed the mezzanine button was already pressed. Was that how she knew him? Was he a graphic artist, too? Under the guise of brushing something off the pant leg of her white suit, she risked a glance at him.
His gaze met hers. Those trademark blue eyes. Wavy, sandy brown hair a little long. Tall, really tall. Big across the shoulders, a tat of a lizard on his bicep… She sucked in a breath. Unbelievable. She’d seen that tattoo—and the man behind it—on the entertainment channel a month ago. Garret McGatlin. Action movie star.
A wild chill tingled through her. She smiled. “Thank you.”
He nodded, pulled his phone from the back pocket of his tight jeans, and started texting.
Glancing down, she noticed his heavy work boots, almost a military look. Was that his normal style, or did he have an action scene to film?
She looked out the moving wall of glass. She’d had a minor crush on him for three years, since she’d seen him in Killing’s Not a Stranger.
He seemed to want his privacy.
She didn’t blame him. She valued her privacy three hundred and sixty three days a year, then, for two intense days of the Comic Artists and Readers Convention, she became a very public star in her own universe. A different person than the reclusive artist she’d let herself become.
Hell, forget his privacy. How many chances would she get to talk to Garret McGatlin?
Sucking in a deep breath, she turned toward him. “Are you filming in Chicago?”
It took him a few seconds to drag his gaze from his phone. “Yes.”
Those eyes. Mmm. Terribly wicked. His nose a bit crooked from doing his own stunts. Lips pressed a little tight, possibly unhappy with being pestered by a fangirl. Strong jaw, freshly shaved. The smooth line of his throat eased down to the V of his black button-down shirt where a light sprinkling of hair showed.
She could play there, nuzzle her lips, tickle and tweak for hours. Oh, crap, was she gawking? Her gaze shot to his.
One perfect light-brown eyebrow arched up and a half-smile curved his lips.