You are here: Products Don’t Stop Till You Get Enough by Chicki Brown 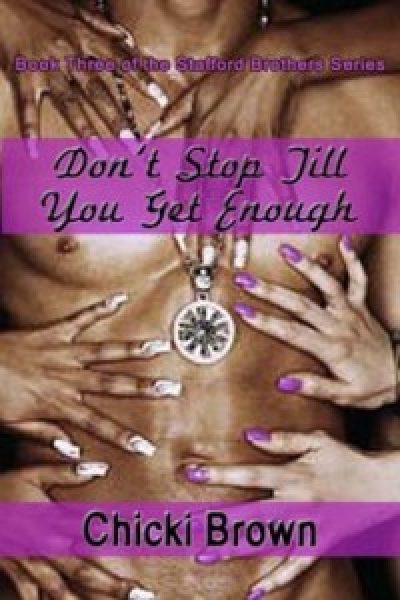 Don’t Stop Till You Get Enough by Chicki Brown

New York TV personality Greg Stafford has been hiding a secret for years. When this secret is exposed to the world, he has to fight to restore his image with the public, his family and his belief in himself.

Therapist Rhani Drake spends her days listening to people’s problems and helping them to overcome their challenges. When Greg Stafford shows up at her office, she isn’t ready for the problems he creates in her life.

He wants to repair his reputation. Is she about to throw her own reputation away to help him?

This is the third book in my Stafford Brothers series, and I wanted to introduce readers to the brother who is different from the first two. Greg comes from a traditional family which believes that a good reputation is a top priority. He has a secret that puts his reputation, and therefore, that of the family in jeopardy.

Greg didn’t know the last person to enter the room and assumed he must be the legal eagle. John pointed to the coffee and waited until the man seated himself. “We all know why we’re here. This situation not only gives The Scoop and the network a black eye, but it’s also a breach of contract on your part,” he said, pinning Greg with a hard stare. Confusion drew Greg’s face into a frown, and John went on to explain further. “A morals clause is a standard inclusion in the contracts of all on-air personalities. Unfortunately, almost no one remembers reading the clause before they sign it.” He slid the papers in front of Greg, and Thad picked them up before he had a chance to take a look.
“This is pretty cut and dried,” Thad said after a few minutes. “To give you the short version, it’s a provision in the contract which curtails, restrains, or forbids certain behavior. The clause is used as a means of holding you to a certain behavioral standard so as not to bring disrepute, contempt or scandal to the network and their interests.”
“Breaking this clause is grounds for disciplinary action or termination,” Ken added.
Always one to think ahead, Thad asked, “Does he have any recourse?”
John squinted. “What kind of recourse, Mr. Jones?”
“What if Mr. Stafford is willing to submit to counseling for a specified period of time?”
“Therapy would play well with the public,” Jordyn chimed in. “Any kind of rehab does.”
“Rehab?” Greg asked of no one in particular.
“There’s rehab for everything these days—not just the big problems,” she explained. “They have rehab for racism, homophobia, rudeness, stupidityyou name it.” A chuckle echoed around the table.
“Would the network be willing to reinstate Mr. Stafford if he completed a mandated course of therapy with a reputable therapist?” Thad asked, directing his question to the station manager, who in turn glanced at the corporate legal guy.
“The decision would be up to you, John,” the corporate attorney said.
Greg had held his tongue long enough. “I don’t get any input in all of this?”
John sent him a snide smirk. “Your gift for inputting got you into this mess, Greg. I’m afraid your judgment can’t be trusted.”
Humiliated, Greg averted his gaze and fiddled with his phone.
A tense silence hung over the room while the station manager contemplated Thad’s proposition. After what seemed like an eternity to Greg, John replied, “Listen, Greg, until now I haven’t been aware of transgressions on your part since you’ve been with The Scoop. I don’t make it a habit of judging another man’s personal life. Who you sleep with is your private business, but since this story broke, the rumors about you and staff members have become the number one topic of discussion in this building. From what I hear, there are even pools to guess the number of coworkers you’ve screwed. You have a problem, and you need to face it.” He stopped and pushed his glasses up on his nose. “This mandated therapy has nothing to do with the women you’ve been involved with on the job. It’s the result of your arrest only, but I have to warn you. Some of the women on staff will surely talk if TMZ or some other outlet offers them the right price. You’d better be prepared for more fallout. And,” He slid a newspaper in Greg’s direction. “it looks as if you have another complication.”
Greg lifted the paper folded to the headline which read, Senator Price makes an official statement. He quickly read the text of the article then passed it to Thad. The senator accused Greg of pursuing his young wife.