You are here: Products Don’t Quote Me by Jasper Swain 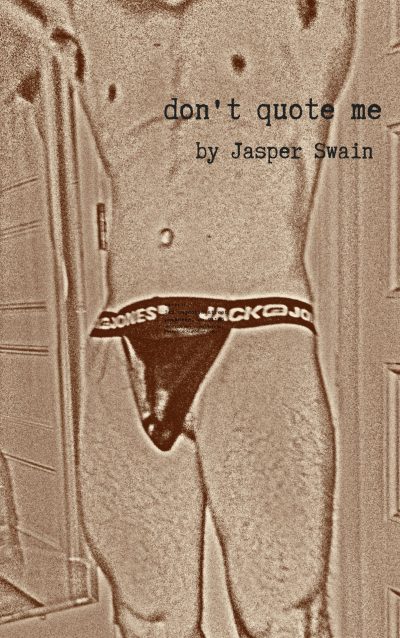 Don’t Quote Me by Jasper Swain

Harry Nast has it all. An apartment in the West Village, a column in a downtown rag, great friends and a slew of lovers. But when one of those lovers calls in the early morning hours and quickly turns up dead, Harry’s life is turned upside down. His apartment is ransacked and his job is suddenly on the line. Soon Harry finds himself trying to solve a mystery far darker than he imagined. Can he keep it all together, or will his own demons get him first? Spanning from New York City to Provincetown, Don’t Quote Me is a story about friendship, gay men and the struggles they face with a healthy dose of romance and sex in the mix. You’ll laugh and you’ll cry. Harry Nast is a character you will not soon forget.

Jasper Swain spent many years chasing the wrong things and he was almost destroyed by his pursuits. Friendship and laughter saved him. When he is not writing Gay Pulp Fiction he is usually walking the streets, observing people and finding humor in the peculiarities of the world.

I was inspired by the loss and loves I have endured in life. I felt there needed to be a voice out there that gay men who have lived on the edge could relate to.

As I stared back at myself in the full length mirror, I felt okay. I tried to imagine myself over a decade ago getting dressed to see Brandon. Suddenly I felt sorry for myself. But it only lasted a minute. Maybe my positive thoughts were a defense mechanism.
I was a kid all those years back. Now I was a man. Or at least working on becoming one. I had fun. I had lived. If something felt good, I did it. I looked older, sure, but not bad considering the facts.
When you’re young and guys are checking you out, you don’t really know how to process it. At least I used to have a hard time. As you get a little older, you learn the different motivations people have. And sometimes if you over-analyze and over-process things, like I do, you can get insulted by the stares. You go through a period when everyone is suspect, and you want someone to love you or desire you for what’s on the ‘inside’.
As I continued aging, I lost some of the youthful edge. Primarily the baby skin with that elasticity of a child. And around that time, guys finally start liking you for who you are. Which was just what I wanted. But then, I’d find
myself missing being checked out solely for my boyish looks. Talk about unhealthy thinking, or at least topics a therapist could explore.
As I stared in the mirror, I smiled. A real smile. I’d lived through my twenties. A feat in itself, as many gay men are not afforded that luxury. Booze, drugs, sex, all of it—- violence, self-hatred. Issues that have gotten the better of many men. Some of my friends included.
At that moment, my mind thought of Robbie Loggia. A handsome Italian guy I’d met and done the whole coke and sex routine with a few times in college. He told me who his father was. A sort of modern-day mobster. He told me his father would kill him if he found out he was a ‘faggot’.
We lost touch. I heard he got more heavily involved with drugs. I’d almost forgotten about him until I was in Law School. I was walking with my entire class down the street when I spotted him. Skinny, washed-out looking, a sore on his face. I turned toward the building. I prayed he wouldn’t recognize me. He didn’t.
A few months later, Beth told me Robbie was dead. I asked her what he died of. “Life,” she said. No judgment. My initial thought was, “I hope I don’t go like that.” I later beat myself up for being so selfish. Selfish acting when I saw him, and again when I found out he died.
As I looked in the mirror, I thought of Robbie. But I no longer beat myself up over these things. I no longer wondered if I needed therapy. I knew I did. And I got it in the form of Dale. His words “Be kind to yourself,” rang through my head.