You are here: Products Do-Overs by Jon Spoelstra 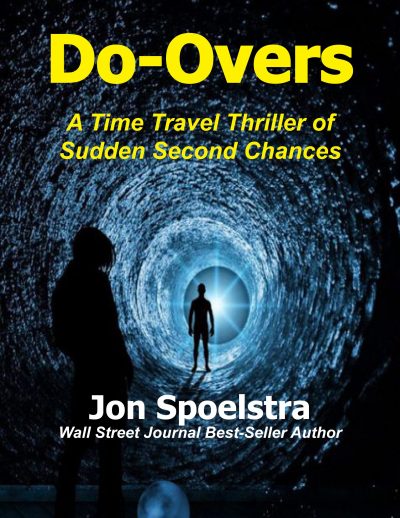 This is an old-fashioned love story caught up in parallel worlds. You won’t guess the twists and turns, but you’ll love the string of daring do-overs ,and you might find yourself cheering out loud

Six years ago, I wrote a novel, posted it on Amazon, and then got distracted and forgot all about it. I know, shame, shame on me. I've got excuses, of course, but they're boring, and can't hide the fact I did nothing for my novel, except write it.

Fast forward to a few months ago. A reader emailed me ( I put my email address in my books) and said she loved my (long-forgotten) novel Do-Overs. And then I got another email from a reader praising Do-Overs.
I opened up my Kindle and started to re-read Do-Overs. I thought to myself: this is pretty good. I kept on reading. I read pretty solidly for a couple of days until I finished it. Yes, I did a do-over on my novel Do-Overs.

"Do-Overs deserves more," I said to myself. I re-did the cover, re-wrote the description, and adjusted some keywords in the Amazon listing. I also bought a few ads on Amazon at twenty cents CPC. Do-Overs started to sell a bit. Not exactly at a Stephen King pace, but Do-Overs was moving up the charts. It's initial ranking was over 3,000,000 and it climbed, small step by small step. Sorta like The Little Train That Could. When sthe ranking got to about 20,000, I figured I should spend more time/money promoting it.

The best part is that folks sent me nice emails about how much they enjoyed Do-Overs. One email even said I should post something on Goodreads about the re-birth of Do-Overs. She wrote, "People should know about this book! It's really a fun read!"

This all leads me to you guys.

I spent most of my adult life running pro sports teams, first NBA teams, and then a group of seven minor league baseball teams.

With each job, there was a crazy amount of travel. With all those miles, I read and I wrote, and when I got tired of doing that, I would read and write some more. My fifth book, Marketing Outrageously, became a Wall Street Journal bestseller.

And then, Amazon Kindle came out. I loved it. Someplace along the line, I vowed never to read a book that wasn't on Kindle. (That vow didn't last, but most of the books I read are on Kindle.) Kindle also got me thinking about doing more of my own writing, expanding into fiction.

I wrote Red Chaser, a novel about the 1950s, the Cold War and the Brooklyn Dodgers. I didn't even go to a mainstream publisher. I only wanted it on Kindle. It sold well. I followed that with Marketing Outrageously Redux, a sequel to my Wall Street Journal bestseller.

Then came Do-Overs, a Time Travel Thriller of Sudden Second Chances. I followed that with a non-fiction How to Get Your Ideas Approved. And now I'm working on a novel, Who's Killing All My Girlfriends. I should probably write a series, but it looks like standalones are my style for awhile.

He looked like a homeless guy except he was waving in my face a dollar bill that seemed to have way too many zeros on it.

He then raised his other hand to my face. I flinched a bit, not knowing what to expect.

There wasn’t a fist or a gun. His thumb and forefinger held several more dollar bills with too many zeros.
These bills looked legit, but I did have difficulty in reading the denomination of the bills without my readers on. I at least could tell with certainty that the bills weren’t one dollar bills, they weren’t tens and they weren’t hundreds. More zeros than two, that was for sure. I squinted and saw four zeros. That would be a ten-thousand-dollar bill! This nut case was fanning at least six or seven ten-thousand-dollar bills in front of my eyes. I stopped walking.

The homeless guy said, “I’ll pay you exactly double what your advance was for The Monster Among Us if you sit down and have a cup of coffee with me.” He flapped the greenbacks in front of my eyes as if they were little fans. “I’m buying,” he said with a small, crooked grin.

Hearing his reference to my book caught my attention.
I looked at him. When I focused, I realized he looked more like an aging, sloppy hippie than a homeless person. I guess there’s a distinction—mainly the smell. He didn’t smell of cheap booze or cigarettes. And his face hadn’t leathered like a homeless person’s would. But I could tell that he hadn’t taken a big bubble bath recently.

He was tall, lanky, in his fifties, and his untended beard was a wild nest of gray. Strangely, he didn’t look crazed or dangerous. He just looked like an old hippie. But who could tell if he was dangerous? After all, I had a best-selling book, The Monster Among Us, which chronicled the life of a nerd turned serial killer—murder-by-murder-by-murder. He looked so harmless were the words repeated by the serial killer’s neighbors, work associates, the cops, members of the jury and even the district attorney. If his sixteen victims could speak from the grave, they would probably say the same thing: He looked so harmless.
I should have kept on walking; the money had to be fake. He probably bought them at a gift store for a buck. He’s probably just another goofball that I seemed to attract. With the little bit of fame that had attached itself to me after my book hit the best seller lists, I’d get goofy suggestions on what to write next. I brought some of it on myself. My publisher told me not to put my email address in the dust jacket of my book. I didn’t listen. I wanted to hear from my readers. Most authors never get to talk to their readers. The author writes the book, the agent sells it, the publisher prints it, the bookstores stock it, the readers buy it. Some of them read it.

More people saw my book because it was turned into a blockbuster movie that grossed more than a hundred million dollars. At least I developed the sense not to have my email address plastered on the big screen. I had gotten smarter.

The first few wild ideas that came my way from my readers I listened to. It was after the fifth suggestion that I realized that a certain portion of my readers were stark raving nuts. That fifth suggestion was a detailed map giving the location of an alien killing field. The dead bodies had turned into mushrooms, poisonous mushrooms. If you ate one, you wouldn’t die; you would become a reincarnated alien.
“The bills are real,” the hippie nerd said, still holding one of the ten-thousand-dollar bills so I could get a better look at it. Instead of a George Washington or a Ben Franklin, a guy named Chase adorned the ten-thousand-dollar bill.

“Salmon P. Chase,” the hippie said. “He was Abraham Lincoln’s Secretary of the Treasury, and later became Chief Justice of the Supreme Court.” I nodded like I knew. “If you took this bill in to a bank, they’d give you ten-thousand dollars for it. If you took it to a collector, you could get thirty thousand, easy. They were taken off the market—all bills over a hundred were—in 1934. These seven bills are yours—on face value, exactly double what your advance was—if you have a cup of coffee with me.”

That was a pretty impressive display. Seventy thousand dollars in that guy’s fist. The street value, however, through collectors could be over two hundred thousand dollars that would pass from the hippie’s fist to mine. But then a thought flashed in my brain: How would this weirdo know what my advance was for The Monster Among Us? Sure enough, my advance was thirty-five grand, less ten percent to my agent. This whack-job was going to give me seventy grand—without a deduction for the agent I presumed—just to listen? This had to be a scam. But those seven ten thousand dollar bills looked legit. Seventy grand to listen? I’m all ears.