You are here: Products Diary of a Freedom Writer “The Experience” by Darrius Garrett @herbanprince 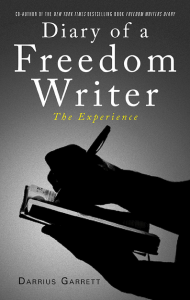 Diary of a Freedom Writer “The Experience” by Darrius Garrett @herbanprince

Survivor… a word continuously thought of when reading this memoir. Upon the release of The Freedom Writers Diary and film adaptation starring Hilary Swank in 2007, New York Times bestselling author Darrius Garrett realized that both book and movie tell the Freedom Writer Story as a whole, but not on a personal level. During speaking engagements, the same questions always surface: ‘Did Ms. Gruwell change you? How did you make it out of the gang life? What stopped you from killing yourself?’ Darrius’s answers are inside.

Diary of a Freedom Writer takes you on a journey beyond the classrooms to the treacherous streets of Long Beach, California. An innocent little boy born in poverty and raised in a violent environment, Darrius became a product of the streets, written off by the school and judicial systems alike, growing up in an environment full of gangs and drugs. He spent his life searching for a father figure until he became a Freedom Writer, motivational speaker, bestselling author, and finally a father himself. His story is that of a man realizing his experiences are what made him the man he has been seeking to be all his life. Upon beating the odds, Diary of a Freedom Writer serves as proof that Darrius’s story of struggle, life, change, and hope will uplift, educate, encourage, and inspire.

Darrius Garrett, Co-Bestselling Author/Actor/Poet/Motivational Speaker/Freedom Writer amongst other entertainment business ventures, has been writing for some time now. Darrius’s major credits are his contributions as co-author of the #1 New York Times Bestselling book entitled “Freedom Writers Diary (1999),” and “Freedom Writers Diary 10th Anniversary Edition (2009)”, which was also made into a motion picture entitled “Freedom Writer (2007)” where the character “Marcus” was based on Darrius. To add to his literary credits Darrius has also written two plays for the El Camino College Theater program working with Dr. Pieter Van Niel. Darrius has a poetry book ready for publishing and he writes scripts for movies & Television.

With the latest violence that has been occurring in the world from school shootings to the Trayvon Martin shooting, Oscar Grant and the usual hood violence that occurred. I knew with the life I used to live that I would have been one of those people that you hear about all the time by being either the victim or the shooter and because of my exposure to writing and people that care like Erin Gruwell (Darrius English Teacher from Freedom Writers) and others, I realized that I have an obligation to tell my story to help others not take the same route that I did. Diary of A Freedom Writer is more than the Freedom Writers story…Its my story; a story of chance,Hope, redemption and tolerance. The fork in the road to those that aren’t quite sure which way to turn.