You are here: Products Dianthe Rising by J B Miller 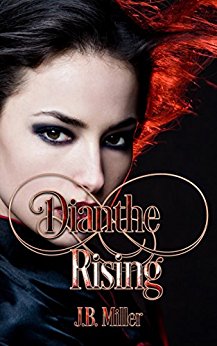 Dianthe Rising by J B Miller

In book one of the Dia Mclearey Series: Twenty years ago a young woman was seduced by the Celtic god, Belenus. She gave birth to a daughter destined to give her mates the power to rule the worlds. However, a mother’s love knows no bounds. She would deny the very gods to ensure her daughter safety.

However, destiny proves it cannot be held back. Now living in London, Dianthe is oblivious to her gifts. Until a girls’ night out almost cost her everything when she meets a hungry vamp. That night, the world she knew turns upside down and she is thrown into the paranormal world.

What does a supposedly human, a wolf king, and an ancient Fae have in common? A woman they each want as their own. Join in as Daniel, Kale, and Robin set out to prove that Dianthe was meant for them.

When the passion flares, can her mates overcome their jealousy before they have to go back to where it all began? Will they survive the battle at the stone of Dianthe’s Rising?

but i can keep the dream alive by writing about them.

I love to read… addicted really.. and one of my Favorite authors.. aka Connie Suttle… told me to get to it and write. She had a meme on her page that said.. if there is a book that you want to read but hasnt been written yet, then write it. That was it for me… I started writing!