You are here: Products Diamonds & Desire by Angelita Gill 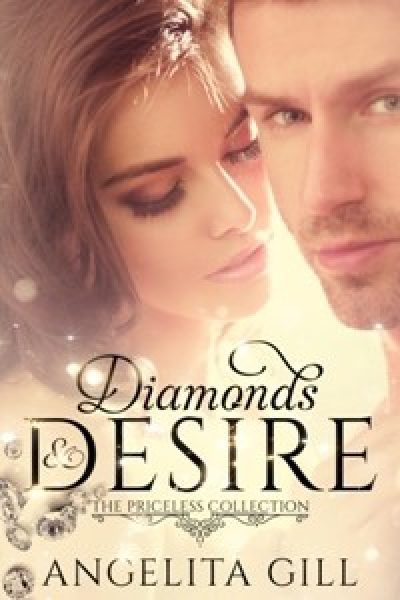 Jordana Shaw thinks taking her sister’s place at a charity auction will be a fun alternative for a Saturday night. Little does she know this favor will change her world forever. Before the night is through, she’s got a diamond necklace in her purse, an unconscious handsome millionaire in bed, and an unbelievable story to tell him in the morning.

It’s not every day a man is rescued by a woman he just met. Logan Savant is not only grateful to Jordana, but also surprisingly enchanted, and eager to return the favor. Little does he know it’ll start with a trip to Vegas to stop her sister’s wedding. But that’s just the beginning. Because bringing her into his world is costing more than he’ll ever have in his bank account.

She’s a proud Trekkie, loves true crime documentaries, martinis with sprinkles, volunteering for the arts, learning to cook like the French, and writing letters to her friends all over the globe. Whether you like it dark or light, she hopes you enjoy her stories as much as she loves writing them. Which she will continue to do so, even if there’s a zombie apocalypse.

I love to write what I love to read! Epic, emotional, sexy, witty romances with a lot of conflict and sensuality. Where the heroes drop constant innuendo and the heroines have all the real power.