You are here: Products Details Of Deception by Jazzlen Breeze 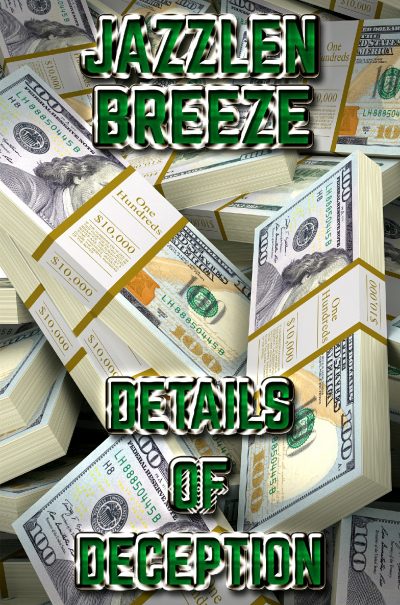 Details Of Deception by Jazzlen Breeze

In 1993 Reggie Bailer was the hottest songwriter/producer in the game, and was for several years. He enjoyed all the spoils that his musical talent had bestowed upon him, an Upper East Side penthouse, a seven figure bank account, a music publishing catalogue that generated thousands while he slept, and a beautiful wife named Georgette, whom he shared it all with. In the Summer of 93, a “Who’s who” of the “Music Industry” were invited to a “Surprise Birthday Party” for Georgette, but strangely she’s a no-show, and vanishes with Reggie’s business manager (Donnie) and everything he owned. It’s now 2018, and after many years of destitution, and the absence of his musical passion to sustain him, the hardships in Reggie’s life seem never ending. But when the sudden murder of a former longtime business associate occurs, it regurgitates painful memories for Reggie, which forces him to inspect the long ago disappearance of Georgette and Donnie a bit more closely. Meanwhile, a random errand morphs into a “merging of talents” between Reggie and an aspiring young artist named Kimeo Caesar, which she believes is a blessing. Kimeo soon learns that the blessing is mixed with jealousy, envy, and danger once she and Reggie achieve “International Success”. Reggie then receives revelating news concerning the long ago disappearance of Georgette and Donnie that has him retracing their steps from 20 years ago, that leads him from place to place, and then closer to the tortuous truth…. a truth guarded by a merciless danger, and the “Details of Deception.

“What do you mean there’s nothing I can do?” Reggie screamed into a pay phone while standing in the rain soaking wet, on the corner of Madison and Forty-Third Street. “Songs that I’ve written and produced are being used in national ad campaigns, and I’m not being paid, Trevor! Am I the only one that sees something wrong with this?” “Reggie, we’ve had this conversation before. You listed Georgette’s name along with yours as a power proxy on your music-publishing catalogue. Georgette, being listed as a power proxy, had the legal authority to license or sell the publishing catalogue, and she chose to sell it. She sold it two days before she and Donnie vanished with everything. I’m sorry. There’s nothing we can do. Reggie, you know if you need anything, you can always come and see me.”

Reggie hung up the phone and made his way toward the public library on Fifth and Forty-Second to get out of the rain. He was seething and tired, not to mention soaking wet. Once inside, he made his way to the men’s restroom on the third floor, it was nice and warm. He could hear the steam coming from the oversize radiator that ran along the back wall. Reggie wanted to lay his clothes across the radiator so they could dry, but he couldn’t hang around naked in the bathroom. But by the way the heat was pumping, his clothes would dry in twenty minutes or so. He decided to tape an out-of-service note to the outside of the bathroom door while hisclothes were drying, figuring people would see the note and just use one of the other restrooms. He walked out of the bathroom and went to one of the research rooms and asked the clerk for a pencil and a sheet of writing paper. He wrote the note and proceeded back tthe restroom. There was one person in there, so he had to wait. When that person left, Reggie taped the note to the outside of thedoor, closed and locked it. He proceeded to get undressed and laid his
sneakers, socks, pants, and shirt on the radiator so they could dry. Then he stood in his boxer shorts directly in front of the radiator to keep warm.

Reggie started to reflect back on what had transpired earlier in the day. While he was roaming aimlessly around Manhattan, around one o'clock, it had started to rain. To avoid getting soaked, he decided to go inside Macy’s. It was years since he had been in there. He was taken back by the modernization of the store. It seemed much larger than what he remembered. As he was making his way through the various departments waiting for the rain to let up, he came across the TV and audio department. He was admiring all the flat-screen TVs that were on display. He was amazed like a child at magic show by the various sizes, brands, and models that were now available. There had to be at least sixty to seventy of them lined up from end to end, floor to ceiling, a full array of sharp-pictured TVs, all tuned to Channel 4 News. He stood back and looked at all of them at once, watching how all of the camera angles changed at the same time; it reminded him of synchronized swimmers. A station break came; it was a commercial for Mercedes-Benz’s latest SUV. As the voice-over artist was describing the features of the vehicle, he heard a familiar melody playing in the background, and then it hit him. That was the chorus melody from a song he had written in February 1989 called Is It So Wrong, ”which reached number one in the summer of 1989. He couldn’t believe what he was hearing. At that very moment, he felt as though he was in an alley and someone had just stuck a gun in his ribs and was robbing him. He felt as though he was about to hyperventilate. He had to get out of that store. As he was making his way out
of the store, he started sweating and was having visions of Georgette and
Donnie laughing at him. He came out of the store through the Herald Square exit
right into the pouring rain, he didn’t seem to notice or care. He made his
way to a phone booth on Madison and Forty-Third, and that’s when he called
Trevor to let him know what had just happened.

Reggie shook his head and sighed as he checked
his clothes to see if they were dry, they were. He proceeded to get dressed
while contemplating his next move. He decided he wanted a drink. Fortunately he didn’t have to panhandle for it; he had two cartons of cigarettes that he had
billed to a credit card along with lunch earlier in the day. As he unlocked the
door, about to make his way out, he turned to see if he had forgotten anything.
He looked around the bathroom and realized he had all of his possessions,
he opened the door, took the note off, and left.