You are here: Products Destiny’s Plan by Victoria Saccenti 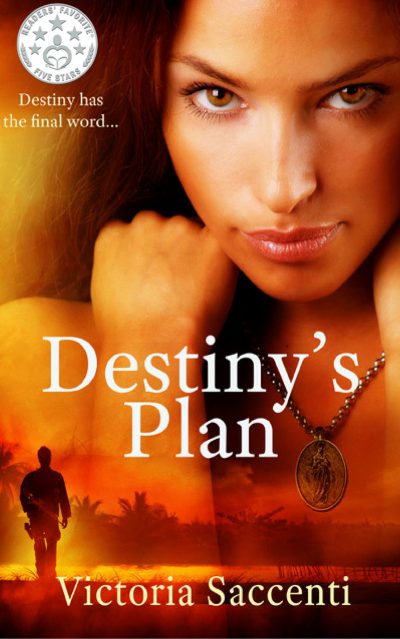 When Raquelita Muro’s overbearing mother rips her and her little sister away from their beloved Papa, one tiny, rebellious corner of Raquelita’s heart is grateful that the bus is crowded, and the only seat left is out of Mama’s sight. Next to a handsome young man.

Matthew Buchanan’s beautiful traveling companion is more than something pretty to look at before he ships out for Viet Nam. Deep in her sad, whisky-colored eyes he glimpses a new dream to replace the ones he’s leaving behind. It breaks his heart to leave Raquelita in her tyrannical mother’s hands, but she gifts him with a token of love and a tender promise to exchange letters in secret.

But their first, shy “hello” has reached the ears of Fate. Fate is in the mood to see how far it can push two lonely hearts—to the brink of temptation, desperation, and despair—before they break. Perhaps beyond any hope of healing…

Victoria Saccenti is a world traveler born in Havana, Cuba. She attended the University of Puerto Rico, and is a contributor to The Ultimate Guide to Dorothy Dunnett’s THE GAME OF KINGS, by Laura Caine Ramsey. She is a member of the RWA and AWFA, an active moderator at the Outlander Book Club (www.outlanderbookclub.freeforums.org), She lives in Orlando, Florida with her husband, but hopes, one day, to relocate to the Highlands of Scotland.

Victoria Saccenti is a writer of Women’s Fiction and Generational Sagas. Her debut novel Destiny’s Plan, takes place during the 1960’s and the Vietnam War, a turbulent era, when the nation lost its innocence, and established traditions tumbled under the pressure of political upheaval and social rebellion. In Destiny’s Plan, Raquelita and Matthew, two young people from very different cultures, meet and fall in love at first sight, but the obstacles ahead promise a difficult journey and Destiny will always have the final word.

The image of Papá waving good-bye still scorched Raquelita Muro’s mind. She tried to swallow, but it was impossible. After last night’s tears, her mouth was dry and raw. Desperate to erase the painful memory, she stared around the unkempt waiting hall, her gaze hopscotching from person to person, reading the emotions of her fellow travelers: excitement, fear, exhaustion. Marité, her younger sister, was lost in her comic book. But Mamá’s irritation, intensified with every grating heel tap on the tiled floor. The wooden benches, the incessant crisscrossing of travelers, and the jarring noise of the loudspeakers did nothing to ease Mamá’s tense disposition.
The two-hour connection seemed endless, and all destinations had been announced except theirs. Not that she was eager for her bus to arrive; given the chance, she would turn back to her father in San Antonio immediately. Their farewell had been rushed and ultimately ruined by another volcanic quarrel between her parents. Papá had wanted to take them to the station, but Mamá refused, arguing it was best to say good-bye at the horse farm. They’d still be arguing if the ranch workers hadn’t stopped to listen in.
“Raquelita, I’m so sick of the pathetic face. Take this,” Mamá said, waving a tissue.
Raquelita took it in silence. As she dabbed her eyes, her attention returned to the activity in the room. The traveling frenzy had slowed, and the evening light filtered through the windows, splashing a curious tint on the distressed walls. Outside, tired golden rays had dimmed into hues of rose and light fuchsia, foreshadowing what waited ahead: a dark, lonely road. As if on cue, a green light above Gate 5 blinked. Bus 5570 was docking. Her fate had arrived.