You are here: Products Destiny of the Light by Louise Cusack 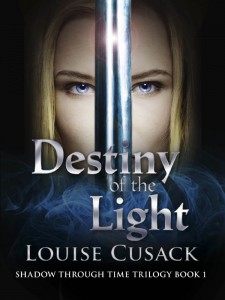 Destiny of the Light by Louise Cusack

Ennae is a parallel world joined to our own world by the Sacred Pool, a portal that can only be opened by one with the Guardian blood running through their veins. It is through this watery gateway that Khatrene leaves her modern-day life behind forever, drawn into a quest that will take her into the depths of the unknown.

Talis, her appointed Guardian, must help her through the dangerous terrain of Ennae, sacrificing everything to ensure her safety in a land where magic prevails and nothing is as it seems.

From an exciting new voice in Australian fantasy fiction comes the first book in the Shadow Through Time trilogy. Beautifully crafted and written, Destiny of the Light combines intrigue, magic and horror to create a reality that is out of this world.

Louise Cusack lives on the southernmost tip of the Great Barrier Reef in Australia. She writes full-time and switches between dark, sensual fantasy and comedic misadventures that involve hapless heroes. But always following a theme of Stranger in a strange land. Louise also works with computer games companies to develop fantasy world building.

As a child I thought Cusack sounded like Cossack, and I’d heard about the little missing princess Anastasia from Russia and I thought I might be her. So I constructed an elaborate fantasy in my mind about going ‘home’ to my own kingdom where I was a princess. As an adult this story had evolved into something dark and sensual, and I’ve loved sharing it with readers.