You are here: Products Desperate Shadows by Jason W. Blair 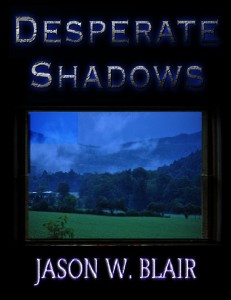 Brockton is a typical American small town—or so it would seem. But to the citizens of this rural Mid-Atlantic community, it anything but normal. It is the type of town where jaywalking, an unfavorable appearance, or an absent-minded slip of the tongue could criminalize you…for life!

Mort and Emily Avery find out just how difficult life in Brockton can be when they stop in for dinner at the local diner. Before their first day in town is over, they find themselves looking at life in prison—for cancelling their order. Then, as if spurred by the newcomers’ arrival, the townsfolk find themselves caught up in a deadly game of cat and mouse. Who can bring order to a town caught in the throes of iniquity?

Today, Jason and his wife Judith live in Bellefonte, Pennsylvania–with their daughter, Samantha. And although his main passion is novels and short stories, Jason is also a poet, and has written several screenplays; that have yet to be discovered.

Most of the storyline in Desperate Shadows was manufactured in the creativity of my mind. But the disdain that Brockton has for anyone they find to be different, in any way; is something that my wife and I have experienced for much of our lives.

As far as the eye could see, people were running about aimlessly. They were swinging their fists and shouting angrily. And a brief moment later, Leila and Dylan dashed in opposite directions—to avoid being pelted by splintered boards ‘The remnants of a bench or windowsill’ Leila assumed.
“Should I start recording?” Dylan asked.
Leila nodded; advancing further into the heart of the town. But when she reached the courthouse—after another half a block—she stopped an old, shirtless man with a dark grey beard. He spat on the ground and began encircling Leila and Dylan.
“Can you tell us who’s in charge here?” Leila asked the old man. But he ignored her, and continued walking around them (Like a shark swimming around, before an attack).
“Is anyone in charge here?” She asked again.
“Is there anyone in charge of him?” Dylan whispered.
He shoved the man aside and started climbing up the courthouse steps, with Leila nipping at his heels. Halfway up the steps, Leila glanced back down at the sidewalk and noticed the old man picking up several small stones. Suddenly, he began to hurl them angrily at her and Dylan.
“Outsiders!” He shouted, “Come to take us all down—Outsiders!”

Be the first to review “Desperate Shadows by Jason W. Blair” Cancel reply