You are here: Products Desires of Lady Elise by Rachel Ann Smith 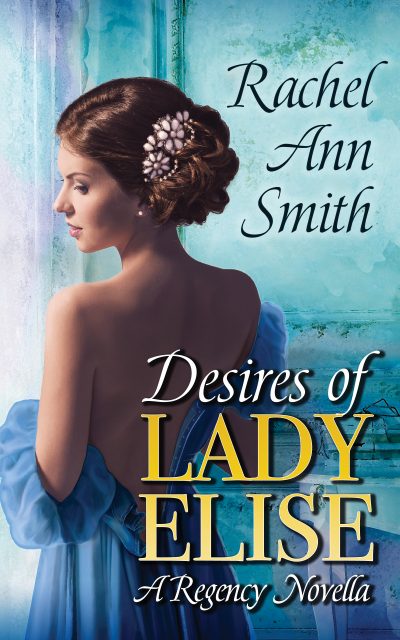 One scandal. Two broken hearts. A decade apart.
Lady Elise knows all too well the risks of falling in love. Her heart was broken by a rake. Instead of hunting for a husband, she helps other ladies escape the nefarious plans of unscrupulous gentlemen.
After a scandal costs Lord Thornston Elise’s hand and heart, he has lived on the fringes of the beau monde. But when his best friend, the Duke of Fairmont, requests his assistance, Thornston is torn. Helping Fairmont means facing the woman who holds his heart and soul.
Succumbing to temptation, Thornston re-enters Society to find Elise still unwed. But as he seeks to reignite her desire for him and earn back her trust, he becomes entwined in one of her investigations. When events take a dangerous turn, he might lose the woman he loves before he can win her back.

Rachel Ann Smith writes steamy historical romances with a twist. Her debut series, Agents of the Home Office, features female protagonists that defy convention.
When Rachel isn’t writing, she loves to read and spend time with her family. She is frequently found with her Kindle by the pool during the summer, on the side-lines of the soccer field in the spring and fall, or curled up on the couch during the winter months.
She currently lives in Colorado with her extremely understanding husband and their two very supportive children.

CHAPTER ONE
I need another drink.
Harold Greenfield, the Earl of Thornston, tried to curtail his frustration. He had been enjoying a whiskey at his club when the Duke of Fairmont dared to disturb his peace.
Peering down his ducal nose, Fairmont declared, “It is time you returned to the fold.” Fairmont settled into the closest wingback chair and stretched out his long legs.
The fiery liquid that was about to go down Harold’s gullet spewed from his mouth. “Why would I do that?”
“I need your assistance.”
Squeezing the bridge of his nose, Harold considered the duke’s request. In the twenty years they had known each other, this was the first time Fairmont had come to him for help. It was an odd reversal of roles. This past decade, Fairmont had remained his only contact with polite society. Harold remained silent and consumed another drink or three. The man couldn’t be serious. Could he?