You are here: Products Desire for Touch by Adira August 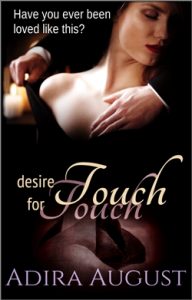 Desire for Touch by Adira August

I’ve chased down bad guys, climbed mountains, searched for dinosaurs and had rather a large number of lovers, though I’m not giving a specific number.

I got tired of books about things sensual or sexual being called “dirty” or “smut.” Some are, I guess, but I love my characters. I want women, and men, to love and embrace and find joy in sex.I want them to feel okay about the things they want, the fantasies they have. Lotsa fun sex! Hey, it’s great for your health!