You are here: Products Desert Son by Glenn Maynard 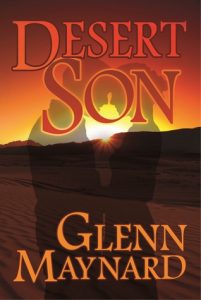 Glenn Maynard is the author of the books “Strapped Into An American Dream” as well as a paranormal trilogy which includes “Desert Son,” “Wayward Soul,” and the upcoming book, Spiritual Intervention.” He has a Bachelor of Arts degree in English from the University of Connecticut, and a degree in Communications. After spending 4 years living in Denver, Colorado, he returned home to Connecticut and now resides in Wethersfield. Glenn has a 16 year-old son named Andrew. As a travel correspondent for three newspapers while exploring the United States, Canada and Mexico during his one-year journey, Glenn published a total of twenty newspaper articles. His story was captured on the NBC local news upon his return.

My inspiration for writing this book was reading a book by Dr. Ian Stevenson, entitled “Twenty Cases Suggestive of Reincarnation.” This book provided detailed cases of children who claimed to have lived before. They discussed how they died and spoke of former family members and location of their previous life. If enough claims were made, the parents would make contact with the other family and bring the child to visit. Even if you do not believe in reincarnation, the details of these case studies make you scratch your head and admit that something pretty strange is going on.

“Ouch…shit!” she screamed out, dropping the cup, and
watching it splatter onto the floor. The coffee reached Carter’s
feet, and wiped out the pastry boxes that were stacked up on a
shelf against the wall. The little foreign man behind the counter
threw his hands up in the air and started blurting out incoherent
words in his own language. He went into a back room and returned
moments later with a mop and bucket, and several small white
rags.
Carter grabbed a couple of rags from his hand and started
wiping the coffee from the girl’s shoes, and kept repeating to the
girl, “Are you ok?” He finally looked into the girl’s eyes and
stopped in his tracks, silenced in the middle of yet another inquiry
as to her condition. Her long, silky black hair hung straight down
to the middle of her back. He noticed by the calm look on her face
that she was more embarrassed than anything else. With the rag in
his hand, Carter grabbed both her hands and began wiping them
clean. Her blue eyes were highlighted by multicolor eyeliner,
which was a wild but pleasing look to Carter.
“I’m okay,” she said, thanking Carter for his assistance. Her
teeth sparkled more so than her eyes, sometimes even reflecting
the sun. She was average looking, but seemingly wilder than Carter
had been used to. She existed in this dark gothic-like aura, which
intrigued Carter. Sure, she had a nice smile, but something about
this girl drew Carter in. Something dark and wild exuded from this
brief encounter.
“I think my hands are dry now,” she said to Carter through a
chuckle.
“Oh, I’m okay, I mean…I’m sorry,” said Carter, nervous and
embarrassed that his attraction and affections were out in the
open. They locked eyes for what seemed an eternity. Carter was no
longer embarrassed. He was struck. There was something about
this girl that Carter needed at this moment in time. Maybe she was
in his shoes, he thought. Maybe she was searching like he was
searching.