You are here: Products Desert Oasis by Asha Carmel 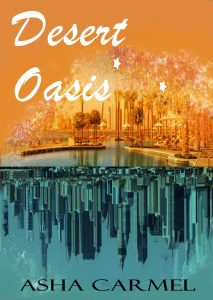 I live in the wilds of outer West London with my boyfriend, cat, dog and goldfish. I have just released my debut novel which is the first in a series of contemporary romances in glamorous international settings.

The original idea came into my head out of nowhere really, I started writing one day and the first chapter just appeared! The setting was inspired by a trip to Dubai not long before I started writing. I found it to be a place of contrasts, between the modern world of luxury hotels and skyscrapers, and the old Dubai of the souks, mosques and desert. I was quite fascinated by it and knew it was somewhere I wanted to revisit in my book.