You are here: Products Desert Hunt by Anna Lowe 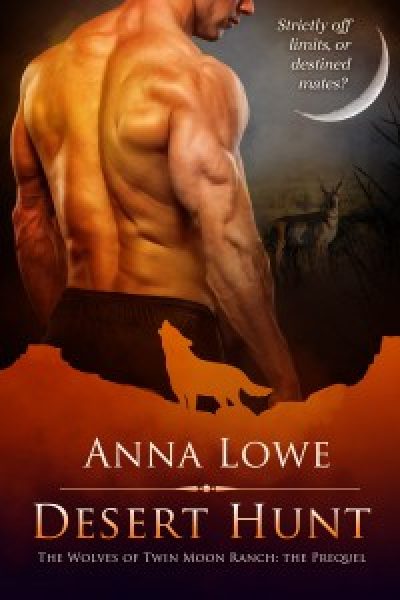 Rae has a secret — one she can’t allow any wolf pack to discover. But with an old enemy hot on her heels, she has no option but to trust Zack, the man from the wrong side of the tracks. Taking off on the back of Zack’s Harley seems like good idea at first, but when she lowers her defenses for the captivating coyote shifter, she might just be risking it all.

The new she-wolf in town may be strictly off-limits, but Zack just can’t keep away. When the thrill of the chase gets his blood pumping in more ways than one, he’s ready to overstep every boundary and break every rule. Destiny says she’s his—but the pack’s ruling alpha says she belongs to another.

There’s more than meets the eye on Twin Moon Ranch, home to a pack of shapeshifting wolves willing to battle for life and love.

USA Today and Amazon Bestselling author Anna Lowe loves putting the “hero” back into heroine and letting location ignite a passionate romance. She likes a heroine who is independent, intelligent, and imperfect – a woman who’s doing just fine on her own. But give the heroine a good man (not to mention a chance to overcome her own inhibitions) and she’ll never turn down the chance for adventure, nor shy away from danger.

Zack came to me bit by bit: first as a coyote, then coyote-wolf mix, and finally as the upcoming young alpha’s best friend, the kid from the wrong side of the tracks. Zack is one of the wounded hero-in-waiting types I love so much, one of those rare people who is born into difficult circumstances yet overcomes the odds. He’s a good man who gets his chance to shine despite many trials and travails.

Excerpt from Desert Hunt: the Prequel to the Wolves of Twin Moon Ranch
by Anna Lowe
“Getting ready to kill someone?”
He heard the words before even realizing they were his own, murmured in her ear. Somehow, the last couple of steps had happened all on their own. And somehow, his voice was steady despite the blood hammering in his ears.
Rae tensed, though she casually brushed a lock of hair behind an ear as if she weren’t surprised to find a near-stranger right at her side.
“Depends,” she muttered.
“Depends on what?”
“Depends on how much someone pisses me off.”
Okay, so he’d snuck up on her. Stealing up unnoticed was one of his best tricks. Coyotes knew stealth—one of the few things about that part of his ancestry that did him any good.
She was playing it cool, but his coyote caught the flare of her nostrils, the pink flush on her cheeks. Either she was annoyed at being caught off guard or she liked having him this close.
Maybe a little of both. His coyote grinned and decided to push a little more.
Never mind that he was supposed to be keeping guys away from her.
Of course not, his coyote huffed. We’re just doing our job. Keeping a close eye on her.
Right. Not showing inappropriate interest. Not salivating over whatever it was about her that was so…so…irresistible.
Well, trying not to, anyway.
“And what does it take to piss you off?” the coyote made him say.
She kept her eyes firmly fixed on the target. “You don’t want to find out.”
Zip! The arrow’s flight sounded different from up close, but the effect was the same: another shaft nestled amongst the dozen bristling from the bull’s-eye. Part of him wouldn’t have minded if that arrow had gone wide of its mark, giving away her emotions. But she was cool, calm, collected.
He hid a smile. He’d been worried about other men getting too close to Rae, but clearly, this woman was not someone to mess with. And yet she let him this close. Why?
“Calling it open season on straw targets?”
“Archery season on pronghorn opens next week,” she murmured, lips against the string.
“You like to hunt?”
“I like to chase.”
So do I, his wolf nodded, licking his lips.
For a moment, he wondered if she’d somehow caught that. Because her lips parted and her shoulder dipped ever so slightly—just enough to make him wonder if she felt it, too. This link. This pull. Like the two of them were a couple of wobbly magnets suspended in that moment of truth before the poles finally made up their minds on whether they’d line up or repel.
“So what’s the bow for, if you’re just going to chase?”
She fingered the barbed tip. “Just in case.”
“In case of what?”
He watched Rae’s eyes close on some ugly memory and regretted the question immediately. Wary fingers stroked the shaft like a talisman, and just like that, her easygoing veneer had vanished, revealing something hard and angry beneath.
“In case I find the right kind of prey.”