You are here: Products Demon’s Destiny by Sarah Bailey 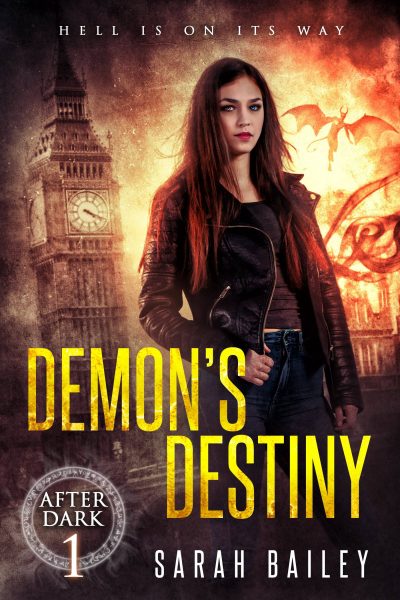 Rescued by a demon. An offer she can’t refuse. Hell is on its way.

Walking home at night in the back streets of London was never a good idea. When her life is threatened, Ella is saved in the nick of time, only to find Lukas is a bounty hunter from Hell. Trusting the enigmatic demon with her darkest secret, Ella Ward is inexplicably drawn to Lukas. Fighting a mutual attraction, she accepts his offer of protection, only to be dragged headlong into a world she barely knew existed. A world where demons tangle with vampires and shifters and Hell literally breaks loose.

Together they hunt down an artefact stolen from Hell. Close on their tail is the vampire Mistress of London, bent on tearing apart the mystery surrounding who Ella really is. Without warning, Ella’s unknown powers explode.

Can she survive the ensuing storm? Or will she lose her heart and soul in the process?

If you like tension filled, steamy supernatural romances then you’ll love Demon’s Destiny, the gripping first instalment to the paranormal romance series, After Dark.

Born and raised in Sussex, UK near the Ashdown Forest where she grew up climbing trees and building Lego towns with her younger brother. Sarah fell in love with novels when she was a teenager reading her aunt’s historical regency romances. She’s always had a love of the supernatural, avidly devouring paranormal romances and TV shows such as True Blood and Supernatural.
Sarah currently resides in Berkshire with her husband and her cat, Smudge. Music is one of her biggest inspirations and she always has something on in the background whilst writing. She is an avid gamer and is often found hogging her husband’s Xbox.
Sarah is also the owner and founder of Twisted Tree Publications.

I was actually on my honeymoon in Iceland over Christmas, that's where this book started for me. I'd been on a break from writing at the time and I hadn't even brought my laptop. We were going on all these tours, which involved a few long coach rides so I was avidly reading. The landscape was beautiful and very inspiring.
I kept having this question in my head – 'What would happen if you fell in love with a demon?'
I'd promised myself I was going to concentrate on spending time with my husband, but he just ended up saying to me – "If you need to write, just write." So, I did even though all I had with me was my phone. I just started writing. By the time we came home, I'd already written about 1/3 of what would become Demon's Destiny.

The cold bit into Ella’s skin. She’d been out with her best friend, Daisy, and it was late. She was desperate to get back to her flat and warm her hands up. Music rang in her ears from the open doorway of a pub as several people streamed out into the night. A couple of them stumbled, laughing in their drunken state.
She turned into an alleyway. A sense of unease pricked the skin on the back of her neck. She glanced around, but she was alone. The glow of the streetlights barely penetrated the alleyway as she walked further in. She heard the scuffle of footsteps behind her and almost froze.
“Hey, lady,” a gruff voice sounded from behind her.
A chill ran down her spine. She stopped, immediately knowing it was a mistake. Turning slowly, she found four men behind her. There was something strange about them, almost as if they did not belong in this world. It stabbed at her senses. They were wrong.
“Look what we have here, boys.”
The smile on the man's face was deadly and his eyes gleamed. Their colour unnatural. Red.
“All alone, are we?” the blonde haired one asked.
“What do you want?” Ella said.
“Come closer, little lady. Maybe you'll find out.”
His friends had the same unnatural eye colour. They weren't human. Her chest constricted, and her hands shook. She took a step back.
“Where do you think you're going?” the tallest one asked.
“I don't want any trouble.”
She put her hands up to attempt to placate them.
“You hear that? She doesn't want any trouble.”
The other men laughed. The hair rose on the back of her neck at the sound. She didn't like the way they leered at her, their gaze predatory. I need to get away from them.
She turned and ran further into the alley, towards the lights at the other end and skidded to a halt when two of the men appeared in front of her out of nowhere.
“You shouldn't have done that,” one of them growled at her.
His eyes glowed with menace as he advanced on her. She tried to back away, but she bumped into a broad chest behind her. She yelped and jumped to the side.
“Please.”
She put her hands up again as she backed herself into the wall. The tall one snarled and stalked towards her.
“We’re going to have fun with you.”
“Please. Don't.”
He gripped her arm and tugged Ella toward him.
“You're a pretty one.” His tongue darted out and licked her cheek. “And tasty too.”
She shuddered, nausea coiling in her stomach.
“Let go of me!”
She tried to pull herself out of his grasp, but he held on tight.
“I like it when they fight back.”
She trembled as his eyes glowed dark red. What were these men?
“Please.” Her voice came out in a hushed whisper.
The man ran his hand down her face and gripped her throat.
His skin was hot. Too hot.
It hit her again.
They were not human.
He pressed her into the wall. His breath tickled her face as he smiled at her.
“I'm going to enjoy making you scream.”
There was a grunt behind them. A yelp and a horrible crunching sound followed. What was that? The sounds of a scuffle and more crunching and ripping noises echoed down the alley. She tried to see beyond the man crowding her face, but she couldn't see.
The man began to turn his head before he was sent flying through the air, smacking into the wall on the other side. Her knees threatened to buckle. She put her hands against the wall to steady herself. She blinked several times before her mouth fell open in horror.
There was a tall man standing in the alley with her. He tore the man who wasn't human limb from limb. She flinched at the sound his flesh made as his head detached from his body. Chunks of flesh and skin littered the ground around the stranger’s feet.
He threw down the body. He gripped the head by the dead man’s hair. The expression of surprise still on his face as black blood dripped from his neck.
She wanted to scream, but she remained frozen with shock. Her eyes sought out her rescuer and her breath hitched.
He was handsome, devastatingly so. Black hair, shaved at the sides and longer on top, which looked a little dishevelled. Dark, almost black eyes bored holes into her own blue ones. She almost wanted to compare him to a Greek God.
Her mouth went dry.
“Are you all right?” he asked with a deep, sultry voice that sent a shiver down her spine.
She couldn't speak. This strange man had just ripped four men to pieces in front of her eyes. She shook her head. He dropped the decapitated head, which rolled away and hit the wall, the face now hidden. He took a step towards her.
“Did they hurt you?”
She shook her head again. She felt a little shaken, but he’d stepped in just in time before they had a chance to do her real harm.