You are here: Products Demons’ Captive by Evanne Lorraine 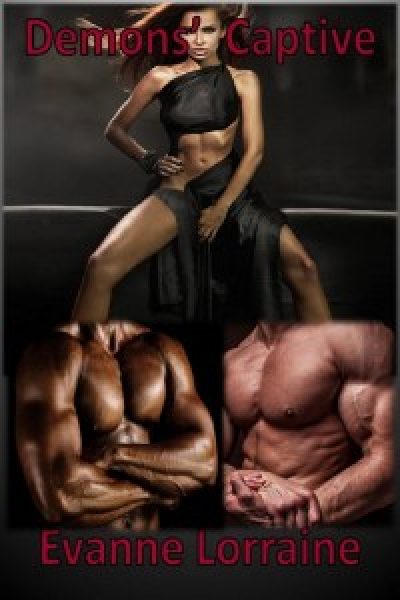 One dangerous warrior woman plus two rogue demon males equals a love to threaten an empire. As a d’skeku trooper, Zaynah belongs to the emperor. Duty is everything. She’s sworn to take her own life if she fails to achieve her mission. When demon brothers rescue her from the wreckage of her spacecraft, she faces a heartbreaking choice between honoring her vows or following her heart.

The rebel demons live to exact vengeance from the Emperor Prado in blood. The hated royal ordered the murder of their brothers, sparing them so they would take the blame for the heinous crime. The demons escaped by stowing away on a miner heading for Ranin Seven. The remote moon, rich in the duranium essential hyper-light travel provides the brothers with a power base to bring their enemy to his knees.

After capturing an imperial they have a new weapon–one of the emperor’s special pets, but a d’skeku assassin is a dangerous blade to wield. She might give them the vital edge they need to win or she might destroy their untested Pan-Galactic Alliance.

Zaynah is their mate and a latent dragon on the cusp of shifting and she’s about to become a whole lot more lethal.

I love hearing from readers, drop me a note anytime!

I adore hot romance and love sci-fiction. Few authors were combining these two genre when I began writing. The Demons and Dragon series grew organically when my New Eden Chronicles touched other worlds.

Diablo studied the favorite tool of every d’skeku assassin with growing dread. Her blade had subtle differences from his. This, more recent, model weighed quilors less, had a sharper curve to the wicked edge, and still packed a lethal charge.
An imperial pilot had been bad enough. The distinctive kekeor made her far more dangerous—a d’skeku—one the emperor’s personal troops.
A beautiful, fuckable woman dropped onto his landing pad. She also happened to be his most dangerous enemy, rotten demon luck in action. The situation was so wrong on so many levels he wanted to howl.
Cautiously, he loosened her one-piece, and gently worked her left arm free, exposing a pair of twined runes. One stood for an imperial assassin, the other branded her as warrior. The tattoo confirmed his fears. He should’ve been turned off, but his horny body didn’t care who’d sent her or why.
Diablo lived parsecs from the nearest settlement with available females. Aroused was his normal state, which sucked. His always achy dick hardened further and his heavy balls tugged the tender flesh of his sac. Discomfort was nothing new. He’d deal.
The inner demon, whispered she was disarmed and a long ways from home and unconscious.
One of his callused palms stroked her smooth arm. Her soft, soft skin pulled him closer. He jerked away from temptation, grinding his molars and locking his hands behind his head. Even a horny fire demon had standards.
She whimpered. The sound was a soft, feminine plea for help, calling to everything that made him male.
Bloody dragonheads! He went right back to cuddling her without considering the possible consequences of getting closer.
An adorable pink tongue darted out, licking lips that would’ve tempted a paragon and fire demons had never been all that big on restraint.
He cursed himself again as he brought the drinking tube to her mouth.
This time she sipped and stirred. One small hand drifted to the neck of her undershirt.
Maybe the fabric bothered her.
He sat down the drink, frowning at the way his hand trembled. Gently he tugged on her opening tab, loosening the snug under garment. Skin damp with perspiration, heightened her sweet-hot seductive scent. An intoxicating aroma of night blooming jasmine, hunger, and irresistible female invaded his nostrils, making him long for a lick. His fingers shook, too clumsy and rough to touch such perfection.
Where her knit top parted, strange red marks curled over her sternum. He peeled the material back, exposing an intricate design and the tantalizing inner curve of pale perfect breasts.
At first he thought the lines wound together in another tattoo. Closer scrutiny revealed the stylized knot hadn’t been inked. A birthmark? He squinted something familiar tugged him nearer. A rash impulse made him trace the pattern. A tingle of power warmed his fingertip. He’d seen markings like those before. Then it hit him. They were ancient runes. Unfortunately, the signs for a d’skeku were the only ones he recognized.
Gunn loved history. He might be able to read the marks.
His fingers continued to burn where they’d touched her strange markings. So she held magic. The compulsion to taste her grew stronger.
He’d never been any good at resisting temptation. He leaned closer, brushing her lips across hers so lightly it barely counted as a kiss. The contact still rocked him from his horns to his cloven feet.
She tasted sweeter than sin. He was an expert on that subject. Reluctantly, he pulled back, aware that how easy the smoking embers between them could turn into wildfire. If he played with her, even a fire demon might get burned.
The small female fisted his suit, anchoring him in place. Her eyelids fluttered and lifted, exposing a sliver of ruby irises.
“More,” she croaked.
Talk about asking for trouble. Human and d’skeku had been scary, but a shifter made involvement with her suicidal.
His sanity must’ve burned off under the heat of her touch. Nothing could’ve stopped him from obeying her imperious demand.