You are here: Products Delivery Man by Robin Stone 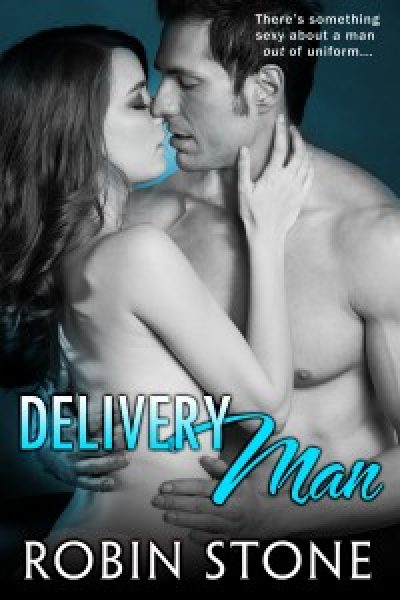 Derek likes working for SpeeDee Delivery. Days pass quickly, and running to and from the truck helps keep him in shape for the summer baseball season.

Ella is a fashion blogger who spends long days at her computer, surrounded by clothes, jewelry, and accessories. Days pass where she doesn’t see a soul, except for the cute delivery man with bright blue eyes and a rockin’ bod.

When Ella offers Derek a cold drink one summer afternoon, the conversation turns from friendly to flirty. But will Derek risk his job for a secret fling with Ella?

My books are standalone reads; even the books that are part of a series. All series are linked by settings or my favorite handyman characters.

I hear women joking about their cute delivery men in brown. I wondered, what would happen if a woman had a fling with her delivery man…and they fell in love?

I grabbed Ella’s package and headed for the door. She opened it before I could knock.
“Hey, sexy.”
I followed her inside and handed her the box. “I can’t stay.”
“Oh?” she asked. “That’s too bad. I was looking forward to…talking.”
My resolve weakened. She was wearing a blue t-shirt, denim shorts, and white flip-flops. A white bikini string peeked out beneath her neckline.
My cock stirred. Ella closed the door.
“I missed you this weekend,” she said.
Stay strong.
“I got in trouble. My boss noticed.”
Ella’s hand flew to her mouth. “Oh, shit.”
I checked my watch. “Before I go, I want to say something—”
“I just need to work faster.”
Ella sank to her knees and unzipped my fly. I wanted to stop her, but I wanted the blow job more. She pulled out my cock and licked it, circling the head with her tongue.
I’d just gotten a warning at work. What the fuck was I thinking?
Mouth.
Wet.
Hot.
It’ll just take a minute.