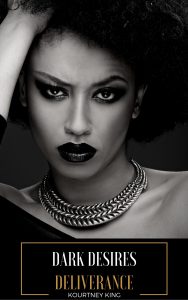 The Impaler – that’s what Valerie’s abductor had called him.

He was ready to put away the title.

He was willing to step out of the game.

Through her writing, Kourtney hopes to provoke thought, strike a debate, and challenge you to question your beliefs about the world and the people living in it.

The first book in this series was a very “safe” read. The couple was finally heading towards a happily ever after, but what happens when the man you love is responsible for weapons getting into the wrong hands in war torn regions? Deliverance takes a sharp turn when Valerie is kidnapped and the man who has her is a client that Vlad had turned down.