You are here: Products Defying Destiny by Cherron Riser 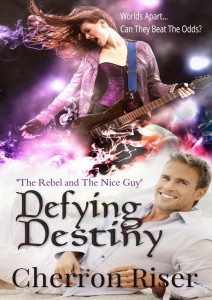 Cameron Burk has just broken up with his long-time girlfriend. But, determined not to miss out on the biggest event of the year, he flies solo to the senior prom. Rhyanna Paramore is onstage providing the entertainment along with her up-and-coming rock band, Defying Destiny. Cameron spends the evening entranced by Rhyanna’s talent and beauty. When they crash into each other after the dance, sparks fly. Though they come from two different worlds, their friendship quickly blossoms into romance.

After graduation, Cameron is off to law school while Rhyanna and her band hit the road, bound for stardom. The years bring them success, though distance and stress take a toll on them both. When the pressure of her nightly performances threatens Rhyanna’s health, a dark secret comes to light.

With their love tested, Cameron and Rhyanna must decide if their relationship is real and worth fighting for. Only by Defying Destiny can they find true happiness together.

Cherron’s published works include three short stories: “Escaping the Beast” appearing in the Winter 2014 Paradoor anthology, and “In the Heat of Escape” and “Engraved with Honeysuckle” in the Spring 2014 Paradoor anthology. Her first full-length novel, Defying Destiny, is set to release in March 10, 2015. Cherron can be found on the web at www.cheronriser.com and on Facebook at www.facebook.com/CherronRiserAuthor.

This book came to me in a dream. I have been around music for a lot of my life. I have also been around people who deal with addiction. When I had the dream for Defying Destiny, I was hooked and had to write it. For me, it was more than telling a story. It was also about healing a part of my own soul. The original name for the book was Two Roads of a Soul, but that was a bit wordy. I felt the original title captured the characters journey well, though.