You are here: Products Deep Flaming Red by JD Samson 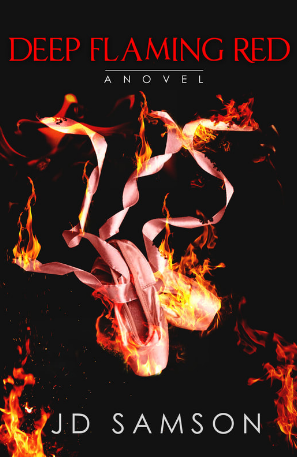 Four years ago, Ethan is nothing but a preacher’s kid, broke as a church mouse with a staggering IQ and a one-way ticket to hell. Scarlett is the heavily guarded State Attorney General’s daughter and a beautiful ballet dancer who took Ethan’s breath away. Bold, intense, and all-consuming, their love defies forbidden boundaries.

Then one night, everything changes. She loses her mind, destroys his life, and disappears, and Ethan’s world comes crashing down.

Now the most respected tech entrepreneur of his time, Ethan has the world at his feet– 27 billion at 27, as they say. Scarlett, now twenty-one, has returned to the U.S to dance and–if she can muster the courage–to make things right with Ethan. But instead of the boy she left behind, she comes face to face with a gorgeous, fiercely controlled man with the lethal power to command any woman’s attention. Could he still have time for the sheltered ballerina he once loved so deeply?

Torn between revenge and desire, Ethan can’t deny their chemistry. The lust between them is inescapable. While their passion soars, deception and lies unfold to reveal the truth behind Scarlett’s disappearance. Together, they will face the dirty truth that has kept them apart, and in a stunning exchange of power, Ethan must decide if revenge could ever be sweeter than her.

DEEP FLAMING RED is the first book in a heart-breakingly sweet and intensely powerful duology about two people who would love without limits if given the chance.

I live in Johannesburg, South Africa with my husband, three children and three poodles. My love for reading began with my weekly trips to the local library when I checked out Louis L’amour books for my father. It was during one of those trips that I discovered the Sweet Valley series and not long afterwards, my first romance novel – a historical Native American romance novel called Silken Savage. I've been a goner for romance novels ever since!

I wrote Deep Flaming Red because in life generally, people believe things that aren't true and what they believe shapes their lives and informs their thoughts and decisions. Imagine trying to be happy, knowing you are the evidence of your mother's rape? How do you accept the simple idea of LIVING, with that kind of conception? What about believing that you deserved to be raped because you were not careful enough?

I wanted to explore those deplorable beliefs.