You are here: Products Deena and the Professor (Bundle 1) by Trudy Judd 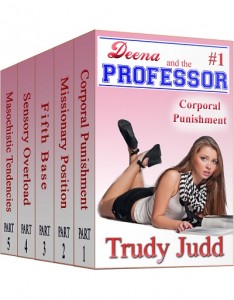 Deena and the Professor (Bundle 1) by Trudy Judd

INEXPERIENCED and freshly in college, Deena has a crush on her Psych professor, Alexander Sturm. When he catches her daydreaming in class, she brazenly admits her darkest desires, to explore the world of domination and submission, pain and pleasure. They make a contract to explore her SEXUAL FANTASIES, but the deeper they go, the more Deena realizes that she doesn’t just want a teacher. She wants to love and serve someone, and be loved in return. As the Professor marks off each item in her fantasy list, Deena fears that time is running out. She must find a way to get Professor Sturm to love her, and keep her forever.