You are here: Products Declan, The Havorian Chronicles Book One by Aleena Stark 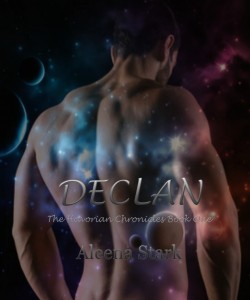 Declan, The Havorian Chronicles Book One by Aleena Stark

All he knew was how much he wanted her.

All she knew was the heat.

After watching her parents abducted from their safe suburban home, Vivian Mason did what any rational woman would— anything to get them back. Forced to trust the sinfully seductive warrior holding the fate of her family in his hands, she found herself trusting him with her life. Little did she know her heart and body would belong to the warrior unless she found some way to fight the heat.

Declan Vulgus refused to let the vulnerable beauty compromise the mission to save his people, but he found himself helpless to resist the heat brewing between himself and the human woman. After years of isolation, had he finally found something worth living for? Will the price of claiming his human captive prove too high for the lonely warrior or will he stake his claim on her heart and soul?

Filled with heartfelt romance spiced with steamy eroticism, this story leaves you begging for more.

The only chance he has to receive salvation is to have it thrown at him by a woman who refuses to let him deny it. Vivian was inspired by the strong women I admire in my life. She is smart, loyal, and resourceful, and refused to accept Declan’s martyr-hood.

“Stop fighting or I’ll tie your hands and legs. I’m taking you to my ship and we will see your family and life mate one way or another. You decide,” he hissed.
His warm breath fanned her neck and earlobe, and Vivian could feel her heart beat out of her chest. The way the words rolling from his lips sent shivers down her spine, she realized he could have demanded she spread her legs and accept him into her body and she would have easily complied. The heat between their skin burned, and she thought she would melt under his weight.
His lips were close, so close she could tell his breath scented of mint, and surrender. Suddenly, the fact he was a kidnapping alien slipped her mind and her body reacted to the feel of his hard flesh pressed against her. She arched her back and moaned as his thick manhood grazed the vee between her legs.
“Don’t do that,” he grunted, but he could feel it too. A need he thought he would never suffer again after so many years of solitude.
“I’m— I’m sorry,” she said. Shaking her head to clear the haze of desire flooding her mind and altering her better judgement.
The look on her face almost softened his heart. He opened his senses soaking her in, and realized how hot her body felt. It was mating heat. He could tell. The memory of experiencing it before, a long time ago, assaulted his thoughts, clouding his judgement. He almost let his body take over his mind before recovering from the haze the scent of her arousal caused.
Begging coherent thought to return, he realized he must have interrupted the ritual between her and her life mate. Shamelessly, he rutted against another man’s woman while she had been prepared to bond with the human much the same way his kind bonded. Her body was on fire, but not for him.
He withdrew from her and stood, stealing once last glance of her sprawled form before turning his head away. The last thing the female alien would want is another man to see her in such need when her mating heat was upon her. He adjusted the front of his pants to accommodate his painful erection, and wondered why his body seemed similarly ready to claim a life mate. He had already enjoyed his happiness, and there could be no other for him.
“So shall I bind you?” He asked.
She failed to stifle the quick intake of air at his suggestion. Images of him binding her arms and legs for other purposes suddenly pervaded her mind. She shook her head to rid herself of thoughts that would only prolong her insanity. How could she be lusting over an alien? One who was hell bent to kidnap her.
Jutting her chin high in the air, she huffed out a breath willing her body to calm, but the heat she felt grew hotter and hotter as she stared at the alien warrior. “Fine. I’ll go with you.” she said, scrambling to her feet.
Much to her surprise, he turned his back to her and strode back the way they came without so much as a glance her way. Shaking her head, she followed him, wondering what other option she had left.

Be the first to review “Declan, The Havorian Chronicles Book One by Aleena Stark” Cancel reply