You are here: Products Deceit and Devotion by Faye Hall 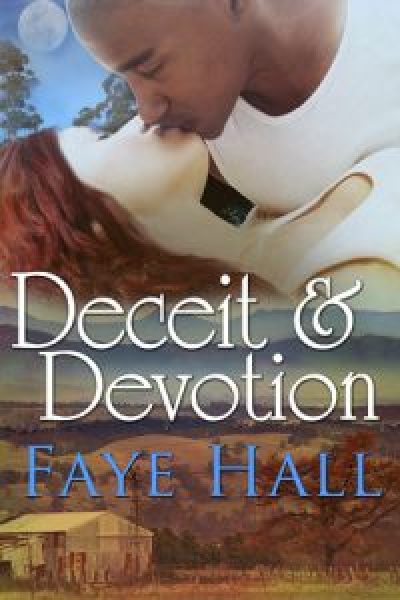 Deceit and Devotion by Faye Hall

Faye was able to live her own passion driven romance, marrying the love of her life after a whirlwind romance in 2013. Together they are raising their 9 children in a remote country town in northern Queensland, Australia.

My husband and I were talking over a glass of wine about some of the local families from our home town and the hardship they must have faced migrating to Australia. Once of us mentioned it would have been harder for those migrants that be friended or even fell in love with anyone from the local Aboriginal tribes. My husband commented that such a story would be good in one of my books. The rest kin of rolled on from there.

Lifting the pillow to his nose, Jarrah breathed deep the sweet scent he knew to be Emily’s. His senses instantly responded, his groin aching for the mere touch of her skin against his again.
“My husband and I don’t share a room, Jarrah,” she remarked from the doorway, forcing him to turn around suddenly. “You’ll find no trace of him in here. If you wish to search through his belongings, then you’ll have to go down the hallway.”
“I have already inspected his room,” he replied, placing the pillow neatly back on her bed.
“Then what are you doing in here?”
He walked toward her, his steps measured. “I want to know who you are. I want to know why a woman as beautiful as you was burdened with a husband who doesn’t love her.” Stopping before her, he lifted his hand to her face, his fingers caressing the soft skin of her cheek. “And I want to know what sort of business requires your attention at such a late hour.”
Emily took a step back from him. “You’ll find none of the answers you seek in this room.”
“Then why don’t you tell me what I want to know, Emily?” Jarrah begged, aching to pull her back to him. “Please.”
He watched the beauty of her face as she smiled slightly at him, and for a moment, he thought she might tell him at least some of her secrets. Slowly, she shook her head.
“You don’t want to hear what I have to tell you,” she said firmly as she went to walk past him and into her room.
His hand came out, gripping her elbow, stopping her. “I want to know where you were tonight,” he said again, more insistent this time.
“Why?” she asked, her gaze holding his. “Why would you care how or where I spend my nights?”
He felt as if he were drowning in the greenness of her eyes, a feeling so very unfamiliar to him. How was he to explain to this woman that he did in fact care quite a lot about her whereabouts when he didn’t even understand it himself?
“Because…” He paused, knowing what he was about to admit. Never before had he allowed himself such a familiar feeling toward any woman. He hadn’t intended to now either, but studying Emily’s slightly freckled, pale skin, her brilliant red hair highlighting her exquisite features, Jarrah knew he could no longer deny what he was feeling. Letting out a steadying sigh, he knew he had little choice but to tell her the truth. “I care because I don’t want you visiting other men and luring them into your bed.”
She raised her brow, her expression unfaltering. “And is that where you think I’ve been the last couple of hours? Trying to lure men to come home with me?”