You are here: Products Death has Sharp Teeth by Dennis Stamey 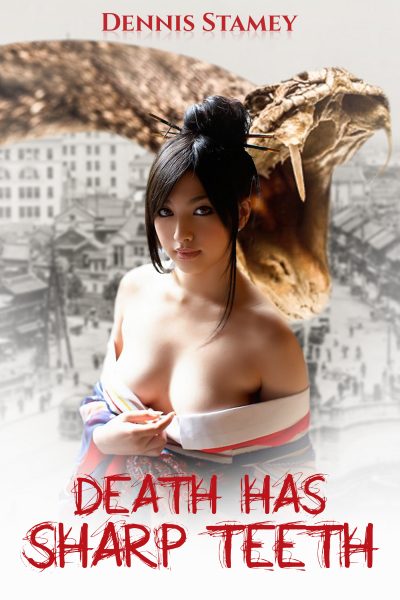 Ready for a sleek, sexy adventure without limits? While Tokyo is gripped by a deadly pandemic, a crime syndicate calling themselves The Black Snake is about to take over. Only one person stands in their way, a rogue detective named Reo Shun, a detective who plays by his own rules, a detective despised by both sides of the law. Their war will reach a horrifying climax, costing many lives and altering Tokyo forever. Meet Zenko Kan, the syndicate’s sadistic leader, Chief Teiji, Reo’s hot-tempered boss, and Lei Wong, a beautiful Chinese businesswoman with a twisted soul. A detective thriller that is unsurpassed! If you like Sam Spade or James Bond, you’ll really like Reo Shun!

My name is Dennis Stamey, I currently reside in Katy, TX, with my wife and three children. I have a BA in Social Science and an MA in ancient, medieval, and Renaissance studies. My interests include writing and learning about the paranormal. My first novel, "The Devil's Horror Show", incorporates a lot of what I've uncovered about the unknown. It's sexually explicit, violent, disturbing but tells a damn good story. It even involves the warping of space and time. How else can John Wayne battle Charles Manson in a Texas shootout?

I was writing a story about a young samurai and developed an interest in Japanese culture as a result. During this time, I happened to watch an episode of Maigret on PBS about the fictional French detective. I was so intrigued that I decided to write a story about a Japanese detective., placing him before the tumult of World War II. I added a dash of James Bond since I had been a fan of Ian Fleming as a kid.

Lei rolled her eyes back and forth, smiled deceitfully, and stuck her forefinger in her mouth. She seemed to be concocting a scheme. “Listen, I didn’t mean to lose my temper,” she said seductively. “It’s just that I’m just amazed you would think I could be involved in something so horrible. I can’t even squash a bug,” She untied her robe and Reo could see that she was completely naked underneath. She drove her body against the detective. Breathing heavily, she took Reo’s hand and placed against one of her breasts and moved it down to her vagina, which was moist and hairless. The detective, though thoroughly aroused, pushed his hand away. Business was business.