You are here: Products Death Dealers by MG Gallows 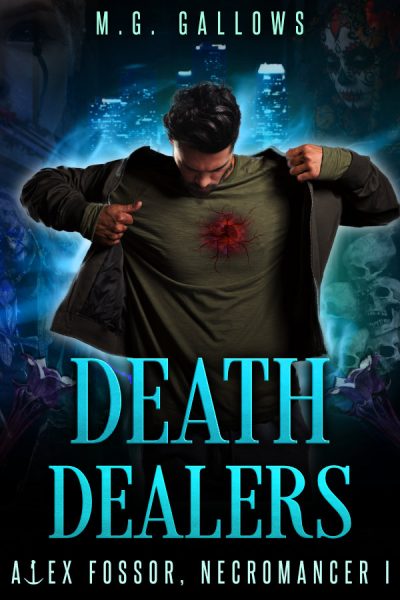 “Don’t dawdle, Alex. My Keepers and I will be searching for that body. If we find it, you’ll know.” Sheriff Agni put a fist over his chest and splayed out his fingers. “Boom.”

A year after a nasty breakup and a big move, Alex Fossor feels like he’s finally getting his life together. Then he gets framed for murder and the Rimbault Society—mages who secretly run the world—drag him before North America’s Archmage. The only thing that stalls Alex’s execution is the same evidence that could damn him, when the victim’s body walks out of the morgue and disappears.

Reviled for his death magic, Alex knows he’ll have to prove his own innocence. But the mundane, the magical, the living and the dead are on his case. A beautiful stranger knows who the real culprit could be, but can Alex trust her to have his back? With time running out, Alex discovers a sinister plot to use arcane drugs to harvest the city’s addicts. He’ll have to embrace everything that makes him a monster in the eyes of the law, before a hex on his heart burns him to ash.

M.G. Gallows is a lifelong nerd with a fascination necromancy (you should see his Magic: The Gathering decks) and a love of storytelling. He believes that a writer should write what they want to read.

Mostly it was a desire to write a novel after years of circling the idea. It took a fairly painful breakup, and a need to distract my mind from the heartbreak, that compelled me to put words to paper. Writing became a buffer against things I couldn't change in my life.