You are here: Products Death Be Blue by Katie Epstein 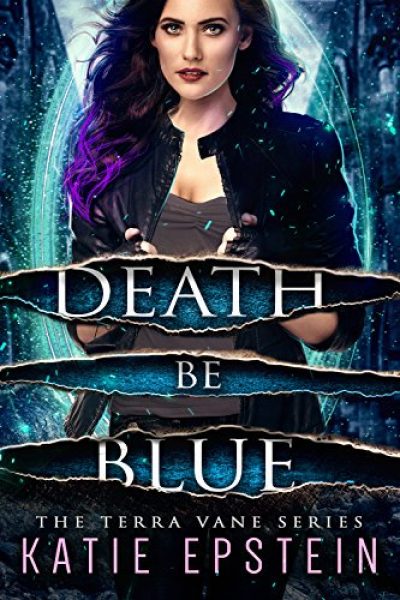 Death Be Blue by Katie Epstein

She can glimpse visions of the past, present, and future but she doesn’t know when, how, or why. She only knows the outcome, and it doesn’t look good…

Being human is hard enough. Being human with psychic abilities is worse. It was for Terra Vane anyway, until she immigrated to Portiside. There she feels at home in the thriving city of the Fey, Shifters, Vampires, and other gifted humans.

Where there are many factions of creatures, however, crime and skirmishes are to be expected. With a stubbornness born out of years of being deemed a “freak,” Terra’s determination and unique ability serve her well as an Enforcer Field Agent for the Portiside City Agency.

Alongside her annoying wolf-shifting partner, Kaleb, there is no case that is too strange to solve. No case too dangerous—until there is, and the trail of bloodlust leads them to unravel a mystery that threatens Portiside as they know it.

Katie Epstein is an author of paranormal romance and fantasy novels. She is known for the Prophecy Child series that was nominated for the Summer Indie Book Awards 2016, and the fairy tale with a twist, Strike at Midnight.
The Terra Vane series is Katie's first attempt at creating a brand new world where writing job descriptions for a fire-breathing fairy is one of her new daily tasks.
Living in the UK, with a husband, two children, and a wild imagination, Katie now dedicates her time to churning out stories in genres where the artistic license is limitless.

There is much a truth in myth, or so they say. And I believe there is a lot of credence to it. It's amazing how so many of these so-called stories, have roots that are akin to many across the world—even though they are thousands of years old. How could this be when people were limited in traveling the world back then?
I love how many more questions this provokes, so I came up with the idea of a new world only a portal away where all of these mythological creatures now live. Add in a human from what they call 'Earthside' and we connect the dots with how we live today. I also wanted to have a female protagonist who could grow with the series, and someone like Terra who is seen as weak among the strong was perfect.

“It was at times like this I had to wonder if I’d made the right choice immigrating through a portal when I was a teenager. Aged only sixteen and stuck in a psychiatric hospital had been my catalyst, however.
Being a human with psychic gifts wasn’t exactly a great candidate for fitting in on Earth—let alone Seattle. So I’d made my home in a place where vampires and shifters were considered normal.
Roll on several years later, my job is something I usually find satisfaction in. But not right now. Right now, I would prefer a home-cooked meal and a soft bed instead of sitting in a place that reeked of stale sweat and urine. ”