You are here: Products Death Bakes a Pecan Pie by Livia J. Washburn 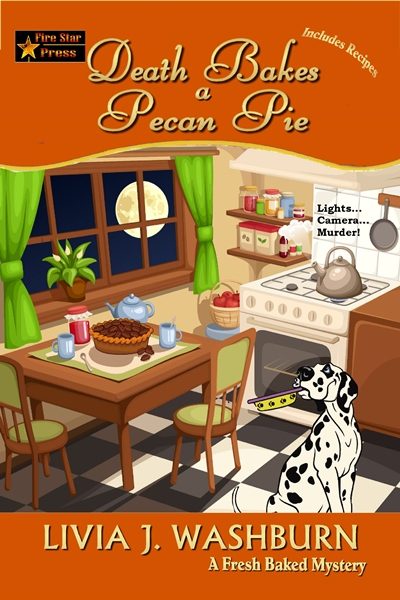 It’s time for the Harvest Festival again, and Phyllis is determined to bake a killer pecan pie.
Hollywood comes to Weatherford, Texas, as a movie company arrives to shoot scenes for a film based on the novel by Phyllis Newsom’s friend Eve. But movie fantasy turns to deadly reality as a murder recreated for film turns out to be the genuine article, and once more Phyllis has to track down a cunning killer to see that justice is done.
DEATH BAKES A PECAN PIE is the fourteenth novel in the critically acclaimed and best-selling Fresh Baked Mystery series. Phyllis and her friends tackle another complex case with all the humor, camaraderie, good-hearted warmth, and delicious recipes that have made readers around the world fall in love with this series.
Recipes included!

Livia J. Washburn has been a professional writer for more than thirty years. She received the Private Eye Writers of America Award and the American Mystery Award for her first mystery, Wild Night, written under the name L. J. Washburn, and she was nominated for a Spur Award by the Western Writers of America for a novel written with her husband, James Reasoner. Her short story “Panhandle Freight” and “Widelooping a Christmas Cowboy” were nominated for a Peacemaker Award by the Western Fictioneers, and her story “Charlie’s Pie” won.
She lives with her husband in a small Texas town, where she is constantly experimenting with new recipes. Her two grown daughters are both teachers in her hometown, and she is very proud of them.

DEATH BAKES A PECAN PIE is the 14th novel in the Fresh-Baked Mystery series. My mother, a retired teacher, always made a killer pecan pie, so that was a natural. Much of the book is set in a park where we used to take our daughters.

The second assistant director slated the shot. Everyone had fallen silent now, so the sharp noise of the clapper coming down on the slate could be heard throughout the park. Phyllis heard Thorpe call, “Action.”
Melissa and Julie walked toward the bales. Phyllis could hear them saying their lines to each other, although she couldn’t make out all the words. Honestly, she didn’t remember what she and Carolyn had said on that day. They had been talking about the festival, she recalled, but Eve had made up their dialogue when writing the book and then that dialogue had been adapted further in the script by Jason and Deanne Wilkes, so it wasn’t exactly like it had been in real life.
There were other differences as well, Phyllis realized. She frowned and said, “The scarecrow was standing up when it happened, with a pole through his clothes to keep him upright. That’s the way you wrote it in the book, Eve.”
“Yes, but it’s easier to film with him sitting down,” Eve said. “That’s what Jason and Deanne told me. They change a lot of things in a movie because it’s easier.”
“I suppose,” Phyllis said. She knew logically that it didn’t matter. The scene would still be very dramatic.
Down in the dogtrot, Melissa and Julie turned to the scarecrow, and Melissa reached out to adjust the way the prop was sitting. Phyllis leaned forward, knowing this was when “Peggy Nelson” would discover the scarecrow was really a corpse.
Suddenly, Melissa leaped backward. A scream ripped from her mouth.
“Goodness!” Carolyn exclaimed. “She’s really putting a lot into it.”
Phyllis caught her breath as Melissa continued to scream. She backpedaled away from the scarecrow so fast she stumbled, lost her balance, and sat down hard on the ground.

Be the first to review “Death Bakes a Pecan Pie by Livia J. Washburn” Cancel reply