You are here: Products Death at Penrose Hill by Rebecca Moisio 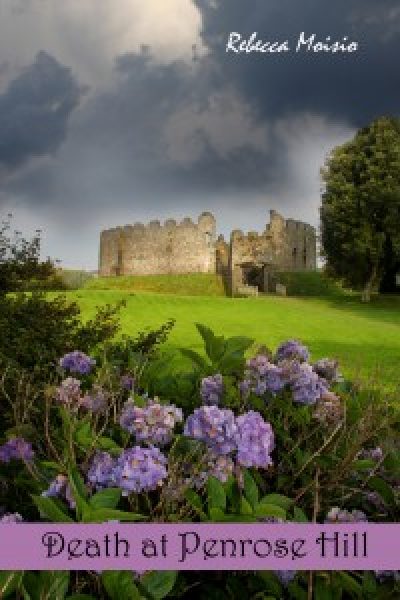 In 1924 England, young and single are the calling card to matchmakers and would-be cupids. Which is the case with Rebecca Highsmith, and her matchmaking aunt; a woman who believes her “spinster” niece is destined for quick marriage as soon as she finds the right man. After being dragged to a coastal party and expected to find her one true love, what Rebecca and the other guests really find is a corpse.

What was originally a bid for love at first sight becomes a twisted game of killer hide-and-seek, as Rebecca races to discover the identity of the murderer before they strike again. Nothing will ever be the same at the Mansion on Penrose Hill!

Rebecca Moisio is a young author from the backwaters of Ohio where she dreams of misunderstood monsters, dashing heroes, and exciting adventures. She is actively striving to become a part of the television production world as she hones her writing skills. She enjoys plotting to take over the world, baking delicious creations, discovering interesting words, and sporks.

My last trip to Cornwall

March 2nd, 1925
The wind whipped across the wide swaths of sea-side fields, cutting straight to the little beetle of a motorcar that they sat in. Rebecca wasn’t much of a fan of the motorcar. On this, she and her Aunt Minerva agreed. It was one of the few things they shared these days. Minerva stared out of the window with her lips pressed into the thin line of disapproval – as if she were scolding the car for its very existence.
Rebecca smirked to herself, pushing a few stray strands of blond hair behind her ear. Her eyes skipped out to the countryside. It was such a stark difference from the compact bustle of London where you brushed elbows with total strangers. She imagined it would be difficult to find anyone out here, let alone a total stranger, with whom to brush elbows. This was the sort of place one could truly let go. All of the stress that had been building up in her head over the past few months suddenly had room to stretch out. She was itching to get out of the confining car. Never mind the chilling wind or the snow on the ground – Rebecca needed to release her pent up emotion to the open air like steam from a valve. It needed to dissipate into nothing.
But as they bounced over the pocked road and the Kernewek manse rose from the rolling hills, Rebecca knew escape might be a long time in coming. It was a shame, really. She loved the ocean in the winter time. There was something about its loneness that made it so very alluring.
“Now, Rebecca,” her aunt suddenly started, pulling Rebecca out of her thoughts.
“Yes, Auntie?” she said dutifully.
The creases in Minerva’s forehead deepened ever so slightly. “Do remember not to call me ‘auntie’ in front of the others, dear,” she admonished. “You’re not a child and I shan’t have you acting as one.”
A longsuffering quirk tipped up the corner of Rebecca’s mouth. “Of course, Aunt Minerva.”
“As I was saying,” Minerva continued, “we must keep our eyes open during this trip.”
Rebecca was fully aware of what was coming next but she ventured the question anyway. “Open for what exactly?”
Her aunt turned her full attention to Rebecca, her expression somewhat surprised. “Why, a husband, of course,” she said, as if her niece should have known all along – which she did.
Rebecca did her best to keep the groan of exasperation from manifesting on her face and she failed spectacularly. “I thought I was marrying Devon Bellfast,” she said with sarcasm edging her voice.
“I thought you rather disliked Devon. Have you changed your mind?”
“Oh no, I think he’s about as interesting as a sack of potatoes—”
“Rebecca!”
“But I wasn’t aware that you were aware that I disliked him,” Rebecca concluded.
“Oh come now, I’m not as blind as all that,” Minerva huffed. Her face softened a touch. “I do want you to be happy, Rebecca. Wouldn’t want to end up like me now, would you?” There was a chuckle from the older woman and Rebecca felt herself smile. This was well worn territory.
“Are you really so unhappy, Auntie?”
Minerva patted her hand with a smile. “Of course not, dear.”
They were pulling up to the house now. It was a massive brick affair – at least, massive compared to the lavish townhouse where Rebecca and Minerva lived. It was big but only because the countryside could afford the space. It was by no means as large as Buckingham. Rather, Rebecca felt as though this house was just big enough to be filled to the brim with a nobleman’s confidence. It was proud with deep roots and a few hints of shady dealings lingering in the foundations. It was neither pompous nor humble but settled somewhere in between. And it was most certainly steeped in wealth.
Ivy was clawing its way up the east corner of the house, slowly – almost spitefully – taking over the walls. There were a series of barns to the right of the house and a large empty space to the left which Rebecca assumed was for a garden. She could see a ribbon of gray ocean beyond the grassy knoll that hugged the immediate property.
The Kernewek’s were in the fish business. Mr. Kernewek owned a fleet of boats and spent most of his time in the nearby town. He also owned massive tracks of farmland which he rented out. Which was to say, they were wealthy. Even without the successful fishing venture, the Kernewek fortune spanned five generations and was rumored to have been the product of a seedy privateer in his Majesties navy. A pirate if ever there was one. But, of course, that was all conjecture.
The car came to a stop in front of the house. Their driver, an amiable fellow by the name of James, came round to open their doors. Rebecca slipped her mystery novel into her bag and stepped out of the car. The wind caught the stray wisps of her hair and, try as she might, she failed to pull them back into a neat bun.
“Minerva!” came a high pitched squeal from the house.
Rebecca looked up to see a plump woman come bustling down the icy steps. Her graying hair was flouncing up and down along with her considerable girth as she practically tackled Minerva. She had to chew her lip to keep from laughing at her aunt’s vexation. But as soon as the irritation crossed her face, a genuine gladness quickly replaced it.