You are here: Products Dealing with the Viscount by Clair Brett 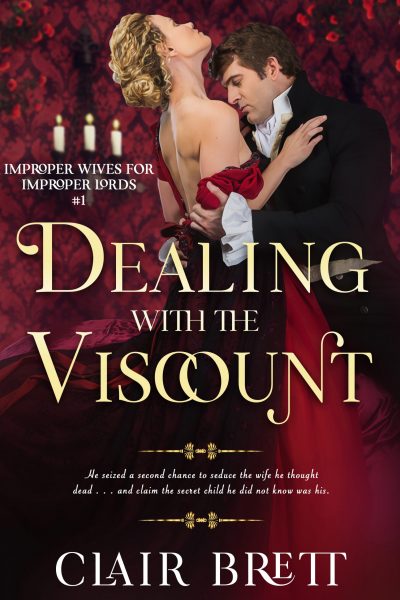 Dealing with the Viscount by Clair Brett

The last person Viscount Devon Renwick would expect to meet in Scotland is his estranged wife, because he was under the impression, he had buried her.
The agreement set four years ago was fulfilled. He never wanted a wife or family, but does he know, enough to prove he can be the husband and father he would want to be?
Will Ella, after having a taste of independence be interested in a new deal struck? Ella doesn’t have time for Devon’s matchmaking, between keeping her bakery running smoothly while, fending off blackmailers claiming to know something, but what?
Ignoring Devon’s advances is impossible. The last thing she needs in her life is a man to take care of.
Between blackmailers and unfortunate news of his wife’s lineage, the question is do either of them deserve a love to last a lifetime?

Almost empty nester, Clair Brett, lives in NH (until she can buy a seaside escape somewhere warm) with her hardworking husband, two cats who take turns holding her down in her office chair daily to make sure Clair gets her word count in, a white spotted boxer/beagle (THE empty nest plan), and for right now the youngest Tenacious Teenager as she finds herself. Her other Fearless Firstborn daughter is serving our great country as a NH Air Guard medic and planning her college career for her RN. (nope Clair isn't proud at all)
When not writing sexy, witty, independent historical heroines, Clair enjoys watching the Red Sox on NESN (it isn't the same when they switch to a network game), cooking, pinning–everything on Pinterest, and planning vacations she may never get to go on until someone leaves her a fortune.
A former middle and high school English teacher, Clair has had a lifetime love affair with reading. Once she read Pride and Prejudice as an extra read in high school, she was hooked. Clair began pursuit of publication when she was a new mother in need of a world that didn't consist of diapers and sleepless nights.
Clair is a firm believer that a reader finds a piece of who they are or learns something about the world with every book they read. She wants her readers to be empowered and to have a refreshed belief in the goodness of people and the power of love after reading her work.

I started writing because I would often think a book should have ended differently. I decided if I felt that way, then I should give it a try, and I was hooked. This book comes from being a young mother of two babies, a full-time school teacher, and a wife in a place far from my family who would daydream about what her life would be like if she just ran away. It sounds horrible now, but this was how I made that escape and was still home in time to make dinner and snuggle. You will see, in the end, my heroine isn't so sure running away was her best option either.