You are here: Products Dealing For A Kiss by LI Martins 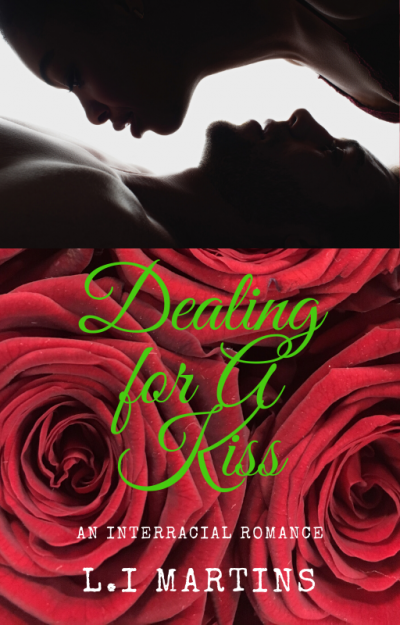 Dealing For A Kiss by LI Martins

After a big fight with her meddling father, Maddy sixteen moves to Britain, leaving her native land of Osicoxi- West Africa.
Michael is the Earl of Darby and only child of the Duke and Duchess of Kent. While his country estate is being renovated, he moves to London temporarily renting an apartment opposite Maddy’s.
Shortly after moving in, he solicits Maddy’s help to handle an ex. Just a kiss, he thinks, what could go wrong with a simple kiss?
From the moment their lips touch, everything changes. Michael can’t get enough and Maddy’s world is turned upside down.
As their attraction for each other grows, Michael’s attachment to Maddy a ‘foreigner’ leads to the revelation of hidden secrets.

I have worked in the corporate world for over twenty years. Writing was my way of escape. In that time, I wrote short stories, poems and songs. I enjoy taking nature walks, good films, reading, writing and experiencing other cultures through travel. I live in Toronto Canada.

Dealing for A Kiss is my first book. It was first written for a cinematic short story competition. I have since written a feature-length screenplay around the concept of this story. The second and third books in this series will delve more into the mystery that is Osicoxi.

Michael got out of the taxi the next morning after his meeting and was heading towards the entrance of his building when he saw Isabelle get out of her car. He groaned silently; he was in no mood to deal with her after the previous night. The fact he hadn’t been able to sleep at all the night before because he was thinking about that kiss did not help his mood at all. So he was less than polite as she approached him.

“Isabelle, we meet again. Is this another chance meeting or have you been waiting for me?” He noticed she’d had a change of clothes. “You’ve obviously been home since last night, so to what do I owe this morning’s visit?” “How was your date?” Isabelle asked. “Izzy, look I’m in no mood for this. I’m tired and need to catch up on some work. What is it you want from me?” Just then that crazy neighbor “Mad” walked up to the building obviously having gone for a run. Great! Just what he needed! One stalker on one side and a mad one on the other. “Isabelle, what can I do for you?” Michael asked sternly.

“Michael, I still love you and I know you love me, why would you look at another woman when you have a woman like me pining for you?” Michael uncomfortable knew he had a very curious spectator, and she was taking her sweet time doing stretches and eagerly watching the drama being put on by Lady Isabelle St James! Michael tried to end the conversation so that inquisitive minds could go into the building, but it seemed Isabelle had other ideas. She was in full “pathetic mode,” repeating intimate details of their past relationship. She had no business revealing this in such a public place. When Michael attempted to stop her, she started crying. Maddy chuckled. Michael gave her a “mind your bloody business” look. She shrugged and walked up to the building entrance still chuckling, she shook her head at the drama being put on by her neighbor and his girlfriend. She really enjoyed seeing his discomfort.
Maddy opened the door and went inside the building, leaving Michael and Isabelle alone. He tried to comfort her, but she clung to him, which made him even more uncomfortable. He then tried to free himself but it was near impossible without hurting her. He spoke gently to her and tried again to disengage himself from Isabelle, but it proved difficult. The only thing he could think of was reminding her of who she was and where she was. It had always worked in the past and it seemed to work again because she straightened up immediately, released Michael from her death grip and stopped crying. Michael now free, quickly ran up the rest of the stairs to the front door. He opened it then turned around to wave goodbye to Isabelle, that was when he realized she had followed him. It would have been rude to push her out, so Michael ignored her and walked up the flight of stairs as quickly as possible to the second floor where he was renting. He took the stairs two at a time. For the first time, he was grateful the building didn’t have elevators. He walked up to his floor before Isabelle in her very high heels.

When he reached his floor, Maddy was in front of her apartment, opening her apartment door. Michael needed to do something drastic and fast or Isabelle may camp out at his door all day if she wanted and he would have no choice but to let her in which would be a terrible idea.
In the interest of self-preservation, Michael dropped his bags, walked up to Maddy and whispered, “I’m desperate, I need your help! Maddy chuckled but eyed him suspiciously. “What kind of help are you looking for Mr. neighbor? How can I possibly help you with your obsessed girlfriend?”
"She's not my girlfriend!” He snapped, exasperated at the thought of begging the crazy woman for help to escape an obsessed ex. “But she wants to be my girlfriend. I need you to help me get rid of her.” Michael said desperately. Maddy contemplates the situation for a moment. “Okay, I’ll help but it’ll cost you,” she told him. At this point, Michael did not care what it would cost. He just wanted to get rid of Isabelle until he could re-group from the previous night’s kiss.“Name your price!” “Twenty thousand pounds” Maddy replied immediately, thinking that would put him off his request but he did not flinch then she added “and a retraction of the noise complaint.” The ease to which he agreed told Maddy she had either asked for too little or he was that desperate and wouldn’t have cared if she had asked for one million pounds and his head on a platter!

"Done!" Michael said. Before Maddy could ask for specifics, they both heard Isabelle coming up the last set of stairs. “What now?” she asked Michael who immediately pressed his lips to hers. It was meant to be a “pretend” kiss for Isabelle’s benefit, to convince her to leave Michael alone instead it turned into something more devastating. The moment Michael’s lips touched Maddy’s he was completely lost in her. Unlike the previous night with Isabelle, kissing Maddy was like kissing the only reason the word “soft” was invented, her lips were moist, most of all it felt like this was her first kiss and this drove Michael wild. He drank from her lips as if his life depended on it. They did not hear Isabelle reach them or when she shrieked “you two should get a room, this is a bloody public corridor!” nor did they see her angrily turn around and walk back downstairs and out of the building. For Michael and Maddy, the world ceased to exist, just each other. When they finally paused to catch a breath, Maddy’s senses returned. Just as Michael was about to kiss her again, she pushed him away and slapped him. This had the desired effect of snapping him out of the enormous desire he was lost in. He had thought last night with Isabelle was mind-blowing, but with Maddy it was everything but most of all he was “home”. He wanted to scream his frustration, joy, anger, excitement, fear, and hope at the turn of events. He was almost forty years old, but he felt like a teenager again.

Maddy quickly turned around opened her door and entered her apartment. Michael tried to follow her in but she slammed the door in his face! He paused for a moment still dazed from the effects of the kiss, turned around, picked up the bags he dropped earlier, opened his apartment door and went inside.