You are here: Products Deadly Transformation by Rosalie King 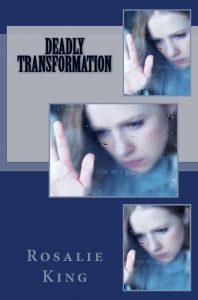 “Rosalie brings a new voice to Romantic Suspense by creating multi-faceted characters who battle challenges and then some. I find my breath being held just a little too long, my heart racing a little bit faster, as she takes me on a journey to perilous lands.” – KC Frantzen, Author of May the K9 Spy series.

A portion of this novel is based on a true story. My friend allowed me to interview her, video camera and all, so that I could include it in my Romantic Thriller.

Prologue Married less than twenty-four hours, Trudie boiled with resentment. Some happy couples in the world may find relocation to a foreign country fit for a honeymoon. Not the newly-betrothed Mrs. Paxton Carlyle. An insufferable ride to London Heathrow Airport offered Trudie a beastly start to her new life. Bullets of rain threatened to shatter the windows of the putrid taxi. Bursts of thunder scurried across the sky in pursuit of souls tormented by fear. “Paxton, what if the plane crashes? I don’t trust the dodgy heaps of metal.” Trudie thumbed the gold anchor on her lucky charm bracelet. The anchor is for protection of travelers. May we be protected! “I guarantee the aircraft will bring us safely to the United States. A traffic accident in this small heap of metal is more likely.” The rap of Paxton’s fist on the dented doorframe proved his point. At a height of thirty thousand feet above the ocean, to plummet from the sky would be far more treacherous than a wreck with the ground less than a foot beneath the car. Paxton’s reassurance vanished in a cloud of dust. Something bad was bound to happen during the dreaded trip. Trudie promised Paxton, the new Chief Executive Officer of Tellurian Oil & Gas in Houston, to be brave and enjoy the two-year duration of his contract. The chances were dismal. The weight of Trudie’s overstuffed handbag ignited a blaze across her upper back with each step throughout the terminal. Crafted from lofty Italian leather, a deep thud resounded when she flung the bag to the floor at the check-in line. “I’ve got to sit.” Trudie plopped onto the cool tiles without regard to the stares of other travelers. Paxton settled his hands across lumps of muscle in her shoulders. The stubborn knots merely seesawed in response to his kneading. “This voyage hasn’t even started, and my mind is already in shambles.” Travelers in line turned in unison toward shouting at the counter. Raised voices intensified. “Don’t get shirty wiv me, miss!” An acrid cockney accent squawked from the front of the line. Trudie pushed off the floor to witness the action. A bony old man with a mass of unkempt hair flashed his stained teeth like a snarling dog. “Use the loaf on your head. I’ve got an impediment, don’tcha see? There’s bound to be an open seat in firs’ class.” “I’m deeply sorry, Mr. Piper,” answered a firm, female voice. Trudie craned her neck to see a young airline employee with an impressive beady stare into the eyes of her adversary. “First class is booked. I’m afraid there’s not a thing I can do.” A single eyebrow arched into a narrow line ending with a sharp downward crook. “Call a supervisor, then.” Mr. Piper hammered his cane on the counter. “At least move me to the bleedin’ front!” “I’ll see what I can do.” She huffed and punched a number on the telephone. Red splotches crested the surface of her cheeks and neck during a brief conversation. “Would anyone be so kind as to exchange seats with this man?” She addressed the crowd through the loud speaker. “Either first class or a row in front?” Trudie eyed Paxton. “Not a chance.” Firm footsteps echoed from behind as a middle-aged man dressed in a business suit advanced toward the counter. “For Pete’s sake!” He grumbled in an American accent and thrust his ticket to the attendant. “Let him have my place.” Mr. Piper nodded in veneration. “I’m grateful to ya lad.” Trudie reached for the dice on her bracelet. Dice is a symbol of luck and chance. May our seats be far from Mr. Piper! As they made their way to first class boarding, Trudie feared the worst: a seat in the proximity of the vilest person on the flight. Indeed, the man’s seat happened to be across the aisle from Paxton. They would have to endure his presence for hours.