You are here: Products Deadlocked by Libby Sinclair 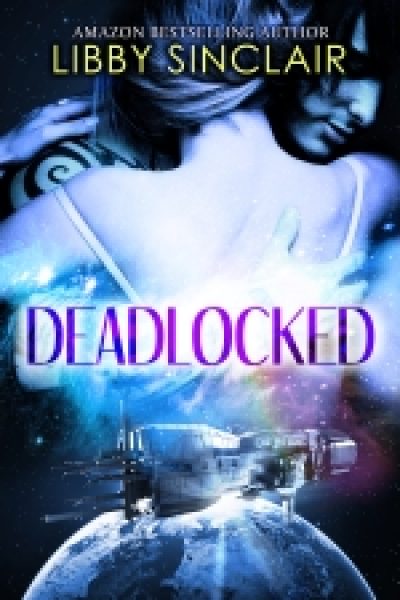 Brielle Connors, former officer for the elite bounty hunters the Cavalier Security Corp, is on a mission. To get her job back and make her old boss and ex-boyfriend look like a fool. After weeks of research and leg work, she finally discovers the holy grail of bounties and sets out to reel it in. Only, the alien Tulan bounty hunter, Finn Strydom, beats her to it. Rushing to the payload and bickering all the way, the two find themselves stranded on an abandoned ship with no hope of rescue. A last minute confession leads to a hot close encounter as the two face death.

Libby Sinclair is a fictionist and has been writing for the last ten years. Inspired by Star Trek, Star Wars, Battlestar Galactica, Voltron, and Mass Effect, Libby mixes lots of action, a little science, and plenty of hot, steamy love to bring your one of a kind science fiction romance. She is happily married and although her husband doesn’t understand her fiction habit, he accepts it.

I was inspired by a thought of two rival bounty hunters trapped in a ship running out of air and if they would confess their love at death’s door.

“I’m surprised Haakon sent you out here alone, don’t Cavaliers travel in pairs?”
Brielle frowned and strode past him to take stock of the beds; several thermal blankets and head cushions, a shelf of surgical gowns, slippers. Nothing of use.
“You aren’t your usual spirited self, Brielle. You’ve barely insulted me. What’s going on?”
“Nothing.” She opened the first set of cabinet doors; empty.
“That’s not going to cut it.” Finn stepped in her way. “In case you haven’t noticed, we are trapped. Signal the Cavaliers.”
Brielle sighed and turned. “I can’t. I don’t have my tracker anymore. It was removed.”
Finn’s brows shot up; his eyes searched her face.
“And Haakon?”
Brielle pressed her jaw shut to keep from responding. Haakon didn’t deserve any more of her consideration. He chose his side when he instructed the medic to remove her tracker.
“His loss, dearest. How that man let the second best hunter in the system slip through his fingers is beyond me.”
“Second best?”
Finn smirked.
“I don’t need to be cheered up right now. We need to get off this ship. Don’t you have some sort of beacon?”
“Independent consultant.” Finn used his fingers to quote the term. “It’s me and only me. No back up.”
“I believe I got a command to my ship. If someone is out there, we could be rescued.”
Finn smiled. “I love how optimistic humans are.”
The lights flicked off. A crack sounded and the room filled with a green glow as Finn activated a glow stick.
“That’s sort of low tech, don’t you think?”
“Would you rather be left in the dark? It works and it’s reliable.” He spun the glow stick in his hand, the light accenting his sea green skin.
Brielle returned and pressed her hands to the bed, leaning against the frame. “How long do you think we have?”
“A couple hours.” He set the glow stick on a stainless steel medical tray, amplifying the light.
This wasn’t how Brielle thought she’d die. Old age was never in the cards for her line of work, but she’d thought she’d die of something a little more glorious than hypothermia. A death in battle perhaps. Hopefully, in the line of duty beside her fellow Cavaliers.
“Perhaps if we build a shelter with the thermal blankets…” She pulled the mattresses off the two closest beds and kicked them into the corner of the room, then threw some blankets on top.
“We are more likely to run out of air than freeze to death.”
“What do you suggest? We slit our wrists, since our fate is undoubtedly decided?”
Finn let his arms drop to his sides, then approached. She had never seen his gaze so intense. She took a step back, her rear end hitting the medical bed frame.
“What are you doing?” She drew her blaster and pressed it against his chin again as he pushed himself against her.
“Something I’ve wanted to do since the moment I first saw you.”
He leaned in, his hands cupping her cheeks, and locked his lips to hers. Her blaster dipped as heat washed over her from the caress of his mouth. Her fear fell away, replaced with something else. Long repressed desire ebbed from her belly and flooded her chest. She shook herself and reasserted her threat.
“I’m not afraid to use this.” She pushed him back with the barrel of her weapon, her breath heaving from her chest.
“Oh I know, dearest. It’s part of your charm.” He flashed his fangs again with a grin, his dark eyes twinkling with amusement. “You can’t deny we have a certain chemistry.”
Brielle couldn’t deny it. But she sure as hell tried. The question was why?

Be the first to review “Deadlocked by Libby Sinclair” Cancel reply